Dynamos, CAPS United tie will have to wait 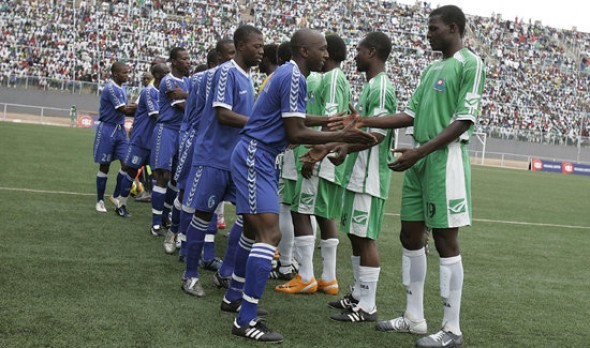 Giants Dynamos and CAPS United will have to wait another week for the eagerly-awaited Harare Derby showdown after initial plans to fixture the game on Sunday clashed with an international fixture involving the Young Warriors on the day at the same venue.

The Premier Soccer League had arranged to have their blue-ribbon fixture, which has turned into the biggest game on the local football calendar in terms of spectator interest, on Sunday.

That would have provided the PSL with back-to-back flagship fixtures, both involving Dynamos, after the Battle of Zimbabwe lived up to expectations and attracted its biggest crowd in years at Barbourfields on Sunday. A buoyant Bosso battled their way to a 1-1 draw against DeMbare to complete the first half of the season unbeaten in the league championship race.

But the PSL will have to draw another fixture for the Dynamos/CAPS United battle after they were advised by Zifa yesterday that it clashed with the Africa Under-20 Youth Championship qualifier against Angola.

Zifa chief executive, Jonathan Mashingaidze, insisted that the league chiefs knew well in advance, after being given a master copy of the international fixtures at the beginning of the year, and should have kept this coming weekend free of league fixtures in the capital.

According to the Fifa rules, international matches take precedence over the domestic games and it appears the PSL might have blundered in overlooking the Under-20 fixture and set the re-arranged Week 12 Harare Derby on the same day. Mashingaidze said it was “nearly impossible” that the league game would go ahead as it was considered an undesired counter attraction.

According to the football rules, the visitors would also need to train at the match venue 24 hours before kickoff, which makes it difficult for the match to be played on Saturday, unless special arrangements could be made like what happened when the Nigerian women’s team visited for an Africa Women’s Championship qualifier earlier this year.

Dynamos dated Monomotapa on Saturday. The match was brought forward by a day and the Nigerians agreed to train earlier with DeMbare and Monomotapa coming in later for the league match that ended 1-0 in favour of Taurai Mangwiro’s men. Mashingaidze yesterday said while they understood the PSL’ predicament, the league authorities should have revisited the calendar before slotting in the game.

“We are aware of the pressure to clear the backlog in our league and we appreciate the efforts being made by the PSL,” said Mashingaidze. But it’s impossible for the game to be played as long as it is in the capital this weekend. According to the law we cannot arrange another big game when there is an international match taking place at the same weekend because it provides an undesired counter attraction.

“I am quite sure the PSL knew about the whole year’s programme for our national teams and there is nothing much we can do to change it. We showed them our calendar at the beginning of the year from the junior age-groups, to women’s football fixtures and the senior team. And should they wish to make any adjustments to their league fixtures, they should do so accordingly because the international matches take precedence,” said Mashingaidze.

DeMbare secretary-general, Ray Kazembe, said it was impossible for the Glamour Boys to play their home game against CAPS United on a Saturday. “That would be a financial disaster for the club and it’s something that we won’t even try because this is our biggest day, in terms of gate-takings, and we want the game on Sunday as originally planned,” said Kazembe.

“We are feeling the pain in terms of the funds that we have used in our last games that have all been away as we also took care of the allowances for the players in Angola and we then had to travel to Bulawayo. A home game against CAPS United would have helped us recover, but we have been told there have been some developments and we believe that we just have to wait and play the game the next Sunday.

“Any other arrangement, like trying to have the game on any other day or ordering us to again go for an away game to FC Platinum next week, would not be a fair arrangement for us.” DeMbare had a four-match backlog midway through the season and the league bosses had rearranged their outstanding fixtures against Highlanders, CAPS United and FC Platinum while the other teams were on a break.

They covered some ground with the game against Highlanders, but it seems the backlog will not go away soon. PSL chief executive, Kenny Ndebele, said they were faced with a “headache” and acknowled ged receiving correspondence from Zifa over the Young Warriors game. However, Ndebele said they were still trying to find a solution.

With DeMbare coming from another big game at Highlanders at the weekend and CAPS United wanting to use the big occasion to revive their championship race, both camps will certainly be left with crushed spirits. Given that the Green Machine had also been preparing for this big game in the past two weeks, the latest developments will come as a huge disappointment.

Shingi Kawondera, who has shown glimpses that he could be a big influence at CAPS United for the remainder of this season, was set to play in his first Harare Derby. Currently Dynamos hold the bragging rights of the city after beating CAPS United home and away last season in contests that were close and were decided by just a single goal.

Tawanda Muparati scored the solitary goal that separated the teams in the first leg at the National Sports Stadium, right at the end, and then Rodrick Mutuma was the chief destroyer in the reverse fixture when he grabbed a brace that eclipsed Evans Gwekwerere’s 59th minute opener for a 2-1 win.

The emergence of teenage winger, Tichaona Mabvura, has raised expectations at DeMbare and he turned on a vintage show at Barbourfields and would have been expected to make another mark in this game. The Herald