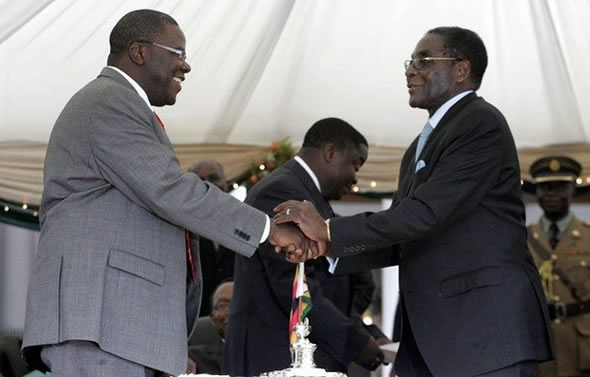 HARARE – Finance minister Tendai Biti has been barred from President Robert Mugabe’s home district, at least when he is on MDC business. Biti was supposed to address a rally organised by his MDC party in Mugabe’s home village of Zvimba on Sunday but local authorities have told him the event cannot proceed.

The MDC secretary-general is on a political campaign trail in Mashonaland West Province and was supposed to be in Zvimba today after police cleared the rally.

Chombo is the legislator for Zvimba North constituency and is a Zanu PF politburo member. He was unavailable for comment. Mhembere refused to discuss the issue.

“I do not want to talk to you about that issue,” he said before switching off his phone. MDC organising secretary for the province Wilson Makanyaire confirmed the development.

“Mhembere told us he has been ordered not to allow us to use the venue. We are aware he has been warned against allowing us any political space in Zvimba by Chombo so he is coming with flimsy excuses that there is a Zanu PF football match after we have booked the venue,” said Makanyaire.

He said the party will hold the rally despite the ban. “There is nothing important about Zanu PF to deserve special treatment. We are going there on Sunday armed with our police clearance,” said Makanyaire.

Makanyaire said Mhembere told him that he feared political violence between Zanu PF youths and MDC members could break out in the event of the rally going ahead.

MDC deputy provincial chairperson Edison Ndirayire said they were going ahead with the rally as scheduled despite the council ban because they had been cleared by the police.

“We understand Chombo gave the order but we do not take instructions from Zanu PF so we expect the police to act professionally and protect the people from hooligans,” said Ndirayire.

“Council officials informed us of the decision not to avail the council grounds for our rally despite us having been cleared by police. We will not tolerate that nonsense anymore. They did that in Darwendale last weekend but this time around our people will not be cowed,” said Ndirayire.

Last week, soldiers and Zanu PF youths disrupted another MDC rally at a stadium in Darwendale forcing Biti to address supporters in a nearby bush. Soldiers and the militia attacked Biti and MDC supporters in the stadium forcing them to retreat to the bush. Daily News