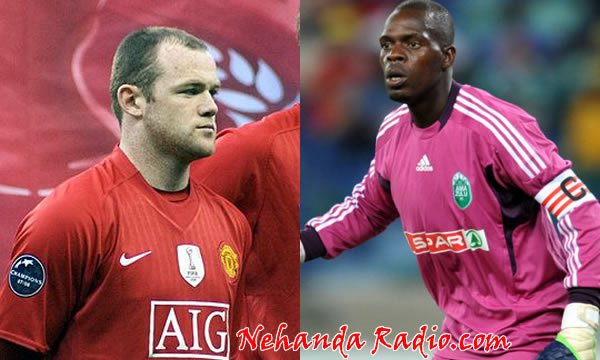 Zimbabwe captain, Tapiwa Kapini, says facing Manchester United’s All-Star team, in an MTN Invitational tie at Moses Mabhida Stadium in Durban tonight, will be one of the major highlights of his career. The match, which has been sold out, will get underway at 8pm.

Although the Red Devils, named by Forbes magazine yesterday as the most valuable sports franchise in the world, have left Wayne Rooney, Ashley Young, Patrice Evra, Ryan Giggs and Danny Welbeck from the touring party, they have brought a strong team. England international, Rio Ferdinand, will captain Manchester United during this tour.

Tonight’s match provides a once-in-a-lifetime chance for Kapini and his Zimbabwean counterparts — Ramson Zhuwawo and Carrington Nyadombo — to line up against the Red Devils. Big centre-back, Nyadombo, has quietly forced his way into the Warriors’ starting XI.

Kapini, who is both the Usuthu and Zimbabwe captain, yesterday told The Herald from his base in Durban that he was looking forward to the big match, which would be a major highlight in his professional career. The Red Devils will face Khama Billiat’s Ajax Cape Town at the Cape Town Stadium on Saturday afternoon.

Kapini said it wasn’t only about fulfilling a friendly fixture but also provided a golden moment to lift the country’s flag high as three Zimbabwean players could take to the field on the night.

“I am excited because it is a once-in-a-lifetime opportunity to get to face such kind of opposition,” said Kapini. It’s something that you always dream about as a footballer in Africa and I must admit rubbing shoulders with the Manchester United stars is a career highlight for most of us.

“As for me, I am taking it seriously and I know all the guys are too because it’s a game that could change your life forever. You never know what it may lead to because the whole world will be watching. There will be international scouts, as well, and the way you introduce yourself on such a stage is very important. It’s every player’s dream to play in Europe but I think for goalkeepers it’s difficult.

“I am happy where I am but if the opportunity to show your talent to the world comes along like this you have to use it.”

Kapini is a hugely popular figure on the domestic football scene and is loved by the fans for the commitment he shows for his national cause. He loves to engage the supporters, when the going gets tough, to make them rally the team to take a step forward and, when victory is secured, joins them in the Zora Butter dance.

It remains to be seen if Kapini will take the Zora Butter dance to the big stage of the Moses Mabhida, in the highly unlikely event that Amazulu post a shock victory, the way Cuthbert Malajila has exported the dance to South Africa. The match will also coincide with the birthday celebrations for former South African president and international icon, Nelson Mandela, who turns 94 today.

The match has raised interest in the city and across the borders as well with reports indicating that tickets had sold out by yesterday despite Manchester United leaving some of their key players.

Sir Alex Ferguson will still be able to put together a squad which will include established players like Paul Scholes, Michael Carrick, Antonio Valencia, Javier Hernandez and Dimitar Berbatov, with Ferdinand wearing the captain’s armband.

Young players like defenders Marnick Vermijl and Scott Wootton and Robbie Brady are expected to feature at the back alongside the captain, with new signings Shinji Kagawa and Nick Powell making their debuts as attacking midfielders.

The last time United visited South Africa they defeated Kaizer Chiefs 4-0. Kapini said they were ready for the challenge and will give everything to get a good result against the Red Devils. “I think we are quite prepared for them. We are all in pre-season and we have been training since the first day that we came from national team duty against Mozambique last month.

“But remember Manchester United are not coming here for fun. They have been preparing and they also want to get results. And difficult as it may seem, we would need to take our chances and I think self confidence is crucial,” said Kapini.

Usuthu currently have a healthy squad made up of the bulk of players who lifted the club to a seventh place finish in the Absa Premiership last season. Coach Roger Palmgren has also bolstered his squad with the signing of three new players in experienced striker Sifiso Vilakazi, left back Prince Hlela and central midfielder Dulee Johnson.

The club management have given the coach targets to finish in the top four and win at least one cup. Kapini said facing Manchester United could help shape their season. “It’s an opportunity for us as well to work on our team ahead of the new season. Sometimes it’s not only about the result but the exposure.

“Our supporters here are very excited and they have been saying we should just go out there and win. “That’s our aim but I think it will be a difficult game because we should not forget the kind of opposition we face. “They are one of the best teams in the world,” said Kapini.

Manchester United were yesterday named the most valuable club in sport, with Forbes magazine saying the Red Devils were worth a staggering US$2.23 billion. Spanish giants, Real Madrid were ranked second at US$1.88 billion while a raft of American football and baseball teams filled the top 10 places.

The New York Yankees baseball team and the Dallas Cowboys football team shred third place with US$1.85 billion. United have lucrative global sponsorship deals with AIG, Turkish Airlines and DHL and claim to have the biggest support base around the world. The Herald