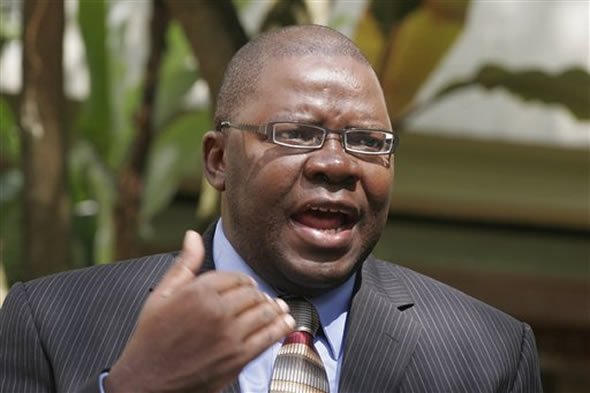 MDC-T secretary-general, Tendai Biti, on Saturday warned that his party supporters would be forced to retaliate if attacked by Zanu PF militias in the run up to next year’s elections, vowing that time for being “cry-babies” was now over.

Biti was addressing an MDC-T rally in a graveyard in Darwendale after soldiers blocked supporters from gathering at the local grounds as scheduled, occupying the venue for several hours.

Biti said unlike in the past, this time around the party was not going to watch its supporters being clobbered by Zanu PF militias. “Next year they are not going to beat us zvokwadi namai Dorothy,” he vowed.

“You have beaten us enough.” Biti said Zanu PF should not provoke his party supporters, as they were now fearless and were in the majority.

In the 2008 Presidential election runoff, the MDC-T complained that hundreds of its supporters were killed, maimed or harassed by Zanu PF militias and elements in the military who were campaigning for the re-election of President Mugabe after he lost the first round to MDC-T leader, Morgan Tsvangirai.

As Biti addressed yesterday’s rally, the atmosphere was tense as 30 soldiers from the nearby Inkomo Barracks, refused to leave the Darwendale grounds, where they were seemingly conducting drills and later played social soccer.

Some of the soldiers allegedly lit fires around the Darwendale grounds and close to the graveyard where Biti was addressing, a move interpreted by some MDC-T officials as intimidating tactics.

The rally was supposed to take place at 10am, but only started after 3pm as hundreds of MDC-T supporters refused to be intimidated by the soldiers, vowing to go ahead as they had booked the venue well in advance.

Contacted for comment, Army spokesperson, Lieutenant-colonel Athanasius Makotore, demanded questions in writing, promising that a response would be ready by tomorrow. He however said if the soldiers were indeed playing social soccer, then they had put the Darwendale grounds to its proper and good use.

But Biti said soldiers must pay allegiance to the constitution of the country and not to individuals. He said despite pronouncements that securocrats would not salute MDC-T president and Prime Minister Morgan Tsvangirai, they would do so at the appropriate time.

“Soldiers are ours and next year this time, they will be saluting Tsvangirai because he will be in office,” said Biti. “They are just posturing.” Zimbabwe Standard