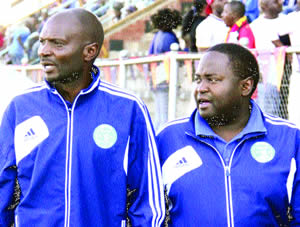 Zimbabwe champions Dynamos were knocked out of the Caf Confederation Cup on Sunday after losing 1-0 to Angola’s InterClube at the Estadio 22 Junho in Luanda.  The two sides had drawn 0-0 in the first leg at Rufaro Stadium two weeks ago.

The Harare club dropped down to the second tier Confed Cup after they were put to the sword by Tunisian giants Esperance, who slaughtered them 6-0 in the first leg in Tunisia before holding the Zimbabweans to a one all draw in the return leg in Harare back in April.

Dynamos and Interclube drew nil all in the first leg of their third round tie of the Confederation Cup in Harare two weeks ago, leaving DeMbare needing a scoring draw in the second leg to qualify.

But it was not to be as Dynamos, just like what happened in Tunis back in April, failed to find their rhythm away from home, losing to the Angolan outfit at the Estadio 22 de Junho here yesterday to crash out 1-0 on aggregate. Interclube got their only goal in controversial circumstances after Nary, who provided the assist, appeared to use his arm to control the ball.

Botswana referee Joshua Bondo, somehow, did not spot the hand ball, but Dynamos players were guilty of not playing on. Manucho came at the end of the pass to finish off nine minutes before half-time. The striker was left unmarked and with the easiest task of slotting past Dynamos goalkeeper Washington Arubi.

“I always tell these boys to play to the whistle and we have suffered because of that,” Dynamos coach Calisto Pasuwa told reporters after the match. “Patson (Jaure) thought the referee would blow but that didn’t happen. You can’t be a player and the referee at the same time.”

Overall, Interclube were a better side. Their skills were better, they were fitter and they were yards quicker. This, however, did not create much scoring opportunities, as the hosts relied too often on their flanks to make headway.

Dynamos were particularly vulnerable on the wingbacks, where Ocean Mushure on the left and David Kutyauripo on the right were being harassed by Alex and Nuno respectively. The two were poor in defence, and each time they moved up-field to join the attack, they were slow to track back. The major let down for Dynamos was the lack of creativity.

They lacked a clean supply of the ball for striker Chinyama to work with, forcing the big forward to constantly join the midfield in search of the ball, making it too easy for the Interclube defenders to frustrate him. In the second half, Dynamos continued chasing shadows, although they managed to limit the damage by keeping Interclube at bay.

Pasuwa pulled out Chinyama late in the second half for Martin Vengesayi while defender Jaure made way for Zambian midfielder Arthur Kaseloki, but it was all in vain.

Soldiers force Biti to hold rally in the bush