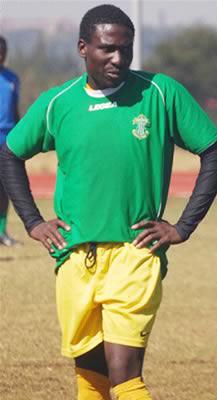 CAPS United have terminated the contract of their captain David Sengu in the wake of the one-day player’s revolt on Tuesday over the delay in the payment of their salaries.

The veteran defender was the fall guy of the industrial action with the club accusing him of failing to discharge his duties as the skipper and contain the player revolt. The Green Machine players boycotted training on Tuesday, a day after arriving from their trip to Bulawayo, after their June salaries, did not reflect in their bank accounts.

Club vice-president Farai Jere, who returned home yesterday, revealed that Sengu, as part of his contractual obligations was either supposed to help stop the industrial action or at worse train alone to give others an example. Apparently, Sengu had been flirting on a last warning after previous disciplinary problems with the club’s leadership.

Jere conceded that there were delays in the payment of player’s salaries but was adamant that it should not have resulted in them downing their tools. CAPS United also opened their cheque-book yesterday and invested in highly rated striker Leonard Fiyado and hardworking defender Hardlife Zvirekwi.

Zvirekwi sealed his CAPS United move on the day that the former Under-20 defender won a call to the Warriors that will travel to Gaborone for a Four-Nation tournament in Botswana over the weekend. Fiyado and Zvirekwi are arriving from CAPS United’s city rivals Gunners.

Jere said it’s a new direction for the club to invest in the junior players rather than invest in old players.

“If you look at Gunners they don’t have the financial resources but have invested in young players who are committed and are always producing good results. They went to Colliery and came out with a very good result. And joining CAPS United is a big achievement for these youngsters and we believe they will cherish it more than some of the players who are at the club.

“Our eyes were opened this weekend when we saw Dynamos performance with the junior players (Tichaona Mabvura and Farai Mupasiri) and it pushed us into gear to deliberately go for the young players. From now onwards the thrust has really changed,” said Jere.

Sengu was conspicuous by his absence at the team’s training yesterday when CAPS United team resumed training at the National Sports Stadium B arena.

Head coach Sean Connor tried to play down the strike reports and claimed that the team was forced to cancel their Tuesday session after they found their venue under renovations and chose to rest after a long journey from Bulawayo.

His deputy Lloyd Chitembwe is away in South Africa where he is attending a refresher course.

However, the Irish coach, in choosing to cover up for industrial action sang a different tune with the club chief executive Maxwell Mironga who admitted that indeed there was an unrest but it was resolved after the salaries later reflected in the player’s bank accounts.

“What happened is that we turned up here to train and we found grounds-men working on the pitch, they should have informed us but they didn’t?

“We then tried to change and go to Gwanzura, but we realised we could not get there in time because of transport logistics. I talked to the management and said after spending about 10 hours on the bus from Bulawayo it would be wiser to rest the players got a day off.

“I even communicated with Lloyd who is away on a course in South Africa. We kept everyone informed,” said Connor. Mironga however said the industrial action was not as big as it was perceived.

“It’s not a big issue and was just a matter of transfers. And the players decided to have a meeting first wanting to know when they were going to get paid. And by1pm when the long meeting ended they were given an off day and the coaches decided that they have a double session today (yesterday),” said Mironga.

CAPS United have already secured the services of former Zimbabwe international Shingi Kawondera who has already played in their last two games against Black Mambas and Highlanders.

Prodigal son Leonard Tsipa is also training with the club while mid-fielder Stephen Alimenda who left unceremoniously at the start of the season appears to have resolved his issues with the Premiership giants and is reportedly keen on another dance with the club.

CAPS United’s biggest undoing has been their lack of firepower and Connor who saw his side fall 1-0 to Bosso will now be hoping that that the arrivals Fiyado will add some bit to their misfiring attack which also includes Evans Gwekwerere, Washington Pakamisa and Clive Kawinga.

“Although everyone is disappointed about Sunday’s result, I think in my opinion that’s our best performance this season and it was the best team we fielded,” said Connor.

On Sunday, they will welcome Hwange at Gwanzura, seeking to return to winning ways after a slump in form which has seen CAPS United going for three matches without a win.

But with Sengu expelled, Connor would now have to look for his fourth captain after previously handing the captaincy to goalkeeper Edmore Sibanda and mid-fielder Edmore Chafungamoyo. The Herald