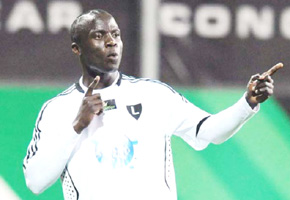 Takesure Chinyama grabbed his second hat-trick of the season as Harare giants Dynamos turned on the style to hit half a dozen goals past hapless Blue Rangers in a Castle Lager Premier Soccer League match at Rufaro yesterday.

Chinyama, who grabbed his first hat-trick in the opening match of the season against Hardbody, was back to his best scoring form and was joined in the party by Farai Mupasiri, Tichaona Mabvura and Roderick Mutuma.

And yesterday he took his tally to seven goals, to leave lasting impressions in one of the last matches on his short stint at DeMbare before moving to South African giants Orlando Pirates. Chinyama opened his account in the 27th minute after Mupasiri had put Dynamos in front just two minutes into the game.

Mupasiri scored his maiden league goal for the Harare giants after winning possession at the edge of the box and then blasting a rising shot that gave goalkeeper Seaba Maponga no chance.

The impressive Dynamos winger created another opening for himself in the 23rd minute when he switched flank and beat his markers on the left before shooting on target but Maponga was equal to the task this time. Then Chinyama received a through pass from Mabvura and neatly chipped the ball over the advancing goalkeeper to double the lead.

Chinyama, who had last scored in the nullified 4-2 win over Hwange on 6 May, could have added another goal after he found himself in an almost similar position following an exchange of passes with Mutuma but the goalkeeper was unyielding.

The big striker turned the supplier when Dynamos found their third goal just two minutes after the restart through Mutuma. The lanky striker poked home on the near post to find the back of the nets after Chinyama had weaved his way into the box and sent a low pass into the penalty area.

DeMbare continued to make intelligent build ups and were rewarded with another goal in the 55th minute when Mabvura responded well to a pass from Mutuma to find the bottom corner of the nets in a crowded area with a perfect shot.

Chinyama grabbed his second, and Dynamos’ fifth, in the 58th minute when he beat defender Tawanda Mupungu and unleashed a left footer that proved too much for the goalkeeper.

The DeMbare striker completed his hat-trick when he finished off a cross from Mutuma in the 90th minute.

The Rangers camp was already in disarray before the game following the abrupt resignation of coach Misheck Chidzambwa who reportedly threw in the towel after clashing with the club’s bosses over team selection.

And it did not get any better for Rangers who finished with 10 men after their captain Takesure Chiragwi was expelled for a second bookable offence about four minutes from time.

Chiragwi was first cautioned in the 50th minute for a crude tackle on Mabvura and referee Langton Chitsa had to send the player for an early shower when he fouled David Kutyauripo in the 86th minute.

All the same, credit to Dynamos for a disciplined performance.

The Glamour Boys put up a polished show to give some form of assurance to their coach Callisto Pasuwa that his job is still safe after the gaffer was given a three-match ultimatum starting from the 1-0 win over Quelaton during the midweek.

So far they have won two of the games and next up could be FC Platinum whom they are scheduled to face in back to back fixtures while their other games against Hwange, Highlanders and CAPS United are still on the table.

Dynamos assistant coach Tonderai Ndiraya was happy with yesterday’s display and praised the players for their team effort.

“It was a good performance from the guys. They put in hard work and we are quite satisfied with their efforts. Everyone played his part and in the end we got six goals,” said Ndiraya.

DeMbare remained sixth on the log table with 23 points, eight adrift of log leaders Highlanders and with three games in hand.

Ndiraya was also pleased with the performances of young players Mabvura and the former Zimbabwe junior rugby international Mupasiri who was in good form after getting a rare starting place in the side.

“We have always wanted to play these youngsters and we were just waiting for the right moment. We felt Rangers are a small team and we gave them a run. They played well but I must say Mabvura has been playing in some of our previous matches,” said Ndiraya.

Rangers are second from the bottom with six points after slumping to their 10th defeat.

Masimba Dinyero who led the technical department conceded defeat but insisted they would fight to survive relegation.

“We lost the plot. Everything went wrong from the beginning when we conceded those silly goals. If we had not conceded early I think we could have played better,” said Dinyero. The Chronicle

A cold welcome for Maneta in Bulawayo