Banana family say ‘we have been abandoned’ 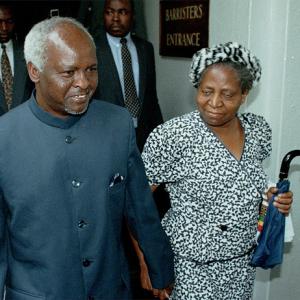 The late former President Canaan Banana’s son has spoken of the family’s frustration at being neglected by the government, saying the sodomy charges his father faced could have been a political sting.

Nathan Banana said his father’s family had been abandoned by the government, with more prominence being given to the sodomy charges, yet Banana had played a priceless part in the independence and unity of Zimbabwe.

“I asked him a year before he died of cancer, about the whole episode of the charges that were levelled against him and he told me that ‘politics is a dirty game, if ever you decide to play, do not expect any fairness as there will always be dirty politicians trying to rub some dirt on you so that they can continue manipulating the people’s trust for their own selfish ends’,” Nathan wrote on his blog last week.

Nathan says things turned for the worse, when Banana developed a close relationship with MDC-T leader, Morgan Tsvangirai, as some Zanu PF members thought the country’s first president was supping with the devil.

The former president’s son concedes that his father may have had consensual relationships with some of the people who later came out to accuse him of sodomy, but maintains that the manner the allegations were made, smirked of a political conspiracy.

Nathan speaks fondly of how his father brokered a peace deal between Zanu PF and (PF) Zapu, bringing to an end the Gukurahundi massacres.  He also spoke about how his father bought a farm and donated it to the government, laying the foundation for Kushinga Phikelela Polytechnic College, yet this role is never recognised.

Among other things, Nathan says his father, a staunch football lover, is hardly ever credited with launching the international football careers of Peter Ndlovu and Benjani Mwaruwari. He engineered the players’ move to foreign clubs, Nathan claimed.

“Canaan Banana is the only Zimbabwean president to resign from his official position in government and did not use his position to enrich himself and his family,” Nathan said.

Banana’s estate is yet to be wound up, as the government is yet to pay outstanding amounts, raising frustration within his family, as the former president was also excluded from the Amended Presidential Act, which covers the benefits of a retired head of state.

“The former First Lady Janet Banana has not been treated as a respectable member of society from such a high office, Zimbabwe has not been fair in the treatment and welfare of individuals who served in high office and fought for the independence of Zimbabwe,” Nathan writes desolately.

Banana was charged and convicted in 1998 on 11 accounts of sodomy and indecent assault and was sentenced to 10 years in prison, of which nine were suspended. He only served six months of his prison term.

At one time he fled Zimbabwe for South Africa fearing an assassination plot, but former President Nelson Mandela, convinced him to return.

He died in 2003 and was buried without the honour that would normally be accorded to heads of state, despite President Robert Mugabe describing him as a “rare gift to the nation”.

The then Zanu PF spokesman, Nathan Shamuyarira said Banana could not be declared a national hero as matter of principle, as homosexuality is regarded as beyond the pale in Zimbabwe. Mugabe has described homosexuals as worse than pigs and dogs. Zimbabwe Standard

Over 50 register for Miss Curvy Zimbabwe