A HARARE man who divorced 10 wives one-after-the-other yesterday sought a protection order against the 11th one whom he accused of beating him up each time they argue. It emerged at the Civil Court that Admire Chivhunga was taking anti retroviral drugs behind the back of his current wife and that was one of the sources of their arguments. 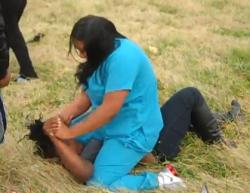 Chivhunga told the Civil Court that as the father of the house he wanted to give direction to the family, but his wife Rumbidzai Chirendo beats him up whenever he speaks. Chirendo stunned the court when she revealed that Chivhunga divorced 10 wives one-after-the-other and she was the 11th.

“He has problems staying with women and he now thinks it’s time for me to go so that he takes in another wife,” she said. “Your worship this man was taking ARVs behind my back and I found this out. He was forced to go for tests and we were both found HIV positive.”

Chirendo said her husband also physically abuses her. “He broke my arm and he was arrested. The 10 wives before me all left because of his abuse,” she said. Magistrate Mr Milton Serima granted the couple a reciprocal protection order. Both parties were ordered to stop insulting or assaulting each other.