Mugabe faces the end of his political career 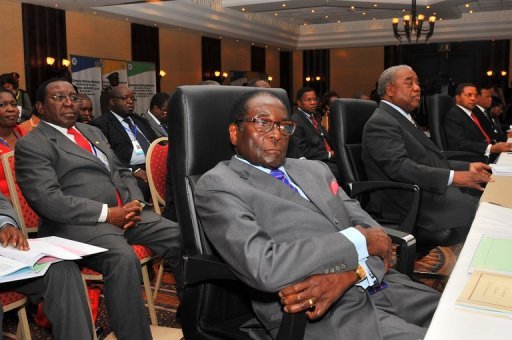 Sources said Zanu PF plans to hold a crisis meeting this week or next week, following the SADC Troika on Defence, Politics and Security meeting which shot down the party’s demands to have elections held this year with or without a new constitution.

The party also wanted the polls before the implementation of agreed reforms to allow 88-year-old Mugabe to contest the election while still in good health. “Our plans to have Mugabe as our party candidate are now in disarray,” said a Politburo source.

“With him turning 89 years next year, we are not sure how feasible it will be for him to stand if elections are held in 2013, given his advanced age and the health factor. From what I am gathering, the politburo and Central committee are likely to meet as a matter of urgency to respond to SADC.”

The source said SADC had stabbed Mugabe in the back, considering that he recently sent envoys to various countries seeking their support to hold elections.

But Zanu PF spokesperson, Rugare Gumbo said the party was not in a crisis, insisting that even if the elections were held next year, Mugabe would still be “as fit as a fiddle.”

“We only want to hold elections this year because we don’t want this to interfere with the UN World Tourism Organisation congress, which will be held in 2013,” he said. MDC-T secretary general, Tendai Biti, said the Angola meeting was probably the most important post-GNU summit.

It tasked Zuma, who is the Sadc facilitator to the Zimbabwean crisis, with directly ensuring the implementation of the outstanding GPA issues.

He said Sadc resolved to set up an implementation mechanism, which would see Zuma coming to the country soon to meet the principals as part of Sadc’s new stance to have a more hands-on-approach to Zimbabwe’s political problems.

Biti’s counterpart in MDC, Priscilla Misihairabwi-Mushonga, confirmed Zuma was coming to review the implementation of unresolved issues. Biti said the troika meeting sent a clear message that for the next 12 months, all agreed electoral, political, security sector and media reforms should be implemented.

Biti said elections could only be held between June and October next year.

He said the lifespan of Parliament would only expire in June 2013, five years after Mugabe was sworn in accordance with section 28(5) of the Constitution, meaning that elections would have to be held within four months after its dissolution.

But Gumbo accused the two MDC formations of misinterpreting the SADC resolutions saying the bloc merely said reforms should be implemented within 12 months.

“We still have seven months before the end of the year. I am confident within the next few months, we will have implemented the reforms in time for elections in 2012,” he said.

Sources said Mugabe was not happy with the GNU, which he described as unconstitutional. He complained that it had been foisted on Zimbabwe by SADC, the African Union and outsiders.

He said the two MDCs were afraid of elections and that since his party differed ideologically with them on policy issues, the inclusive government had become an impediment to progress.

Tsvangirai read a written statement, where he lamented the resurgence of violence linked to elections and expressed dissatisfaction with the police and appointments, which Mugabe made without consulting him in violation of the GPA.

“Tsvangirai also accused Mugabe of blocking reforms and not putting pressure on people like (the Minister of Media, Information and Publicity, Webster) Shamu to implement media reforms that were agreed on,” the source continued.

MDC leader, Welshman Ncube was the last to speak and disputed Mugabe’s claims on the lifespan of the GPA and what had led to its formation.

He is said to have accused Mugabe of being the stumbling block in the implementation of the election roadmap. This drew Mugabe’s ire who said Ncube was unelected and his party was split and he did not recognise him but instead, he recognised Arthur Mutambara, who he had sworn in as deputy prime minister.

Sources who attended the Sadc summit revealed the meeting was full of fireworks. They said Tanzanian Prime Minister, Mizengo Pinda, told Mugabe to behave like an elder statesman and stop calling for elections this year, warning this would only take Zimbabwe back to the “dark days of 2008”.

Pinda did not understand Mugabe’s impatience on holding elections and told him to do it “for the people”, not just himself. Pinda was however continuously interjected by Zambian president, Michael Sata, the only leader to support an election this year.

Sata said Mugabe had no business discussing issues with “these boys who were not there in 1963 (at the formation of Zanu), like Prime Minister Morgan Tsvangirai, who was on holiday, while the two presidents fought colonial regimes in their respective countries”.