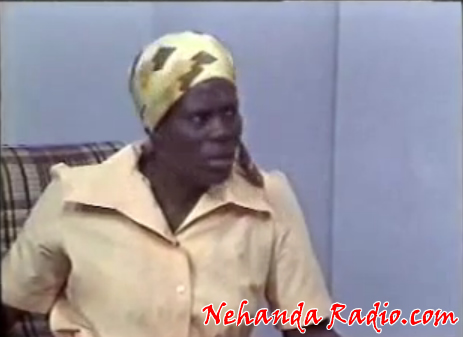 To those who worship at The New Gospel Church of God in Mbare and Banket in Mashonaland West Province, Susan Chenjerai is one of the many pastors who routinely read verses from the Bible.

But to the residents of Beatrice Cottages in Mbare, the modest house at No. 1 Barbara Tredgold Street is held in high esteem by those who know the owner and her claim to fame.

She is “Mai Rwizi”, arguably one of Zimbabwe’s best actresses, who dazzled television viewers in the Mukadota drama series in the 1980s. She acted alongside comedian-cum-musician, Safirio Madzikatire, or simply Mukadota, who was the protagonist in the drama series.

Mai Rwizi a jack of all trades

‘Tuku was a clever politician’

No one ever imagined, even in the wildest of their dreams, that “Mai Rwizi”, whose natural flair on stage before making the big break in front of the lens made her an instant hit with the audience, would one day abandon the screen for the pulpit.

Back then, “The Mukadota Family” sitcom was one of the leading television programmes that could keep many households glued to their screens.

“Regai ndinyatsopfekawo twukokoda twangu pamwe ndingabudawo panewspaper  zvakanaka (Let me put on my best shoes to make an impression to your readers if you publish my story in your newspaper),” she joked, as she prepared herself for a photo shoot with the media.

Talking to her, one cannot help noticing that she has not lost her humour, as she makes it a habit to leave people in stitches whenever she opens her mouth.

“Many people thought I was dead but I am still alive and now a full-time pastor at The New Gospel Church of God that my husband Lovemore Bope formed several years ago,’’ she said with a mischievous smile on her face.

Although she made a name for herself on TV, with producers, film directors, family and fans still yearning for her comeback, “Mai Rwizi” has vowed never to bounce back into acting again.

“I cannot go back to acting because the Lord called me and I cannot serve two masters at the same time.

And true to her word, there is a sad story between her and Madzikatire despite the glamourous career they shared.

“Bhudhi (Mukadota) signed contracts on all the songs I composed and now I cannot lay claim to my songs because I did not personally sign for the songs. I’m the one who composed the hit song ‘KwaHanyani’,” she said.

The long association with Madzikatire on both stage and screen led to the assumption in many people’s minds that the two were husband and wife.

“He was like a brother to me. I used to talk to his son Elijah after his death but I lost his phone number. Maybe we can help each other to get royalties for our plays, which were screened on television,” she said.

Although she has been taking a low profile for many years now, Mai Rwizi was recently honoured by the Professional Women Executives and Business Forum (Proweb) for her role in the arts sector.

She received the accolade alongside some of the country’s luminaries like renowned talk-show hostess Amai Rebecca Chisamba and Women’s Affairs Minister Dr Olivia Muchena.

Mai Rwizi, who cannot remember her exact age, believes that she was born sometime in the mid-1940s. She is a mother of five and has 44 grandchildren as well as great-grandchildren.

Why beating up African presidents is therapeutic

Mai Rwizi a jack of all trades

‘Tuku was a clever politician’

Down memory lane with Mai Rwizi