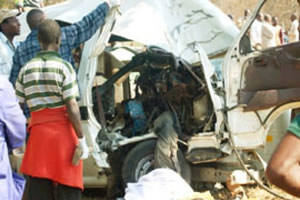 THIRTEEN members of an apostolic sect died on the spot yesterday, while eight others were seriously injured when their kombi smashed onto a tree 50km from Harare on the Bindura Road. The driver lost control when a tyre burst.

The church members, who were coming from Dzivarasekwa and Warren Park in Harare, were travelling for a gathering at Gowora in Madziwa. Police had to collect body parts from the side of the road.

The vehicle was reduced to a shell and the injured were rushed to Concession Hospital and hospitals in Harare. Mr Lancelot Timothy, who stays at Harmony Farm near the scene of the accident, said two toddlers were among the survivors, while their mothers died on the spot.

Crash victim in need of help

“The two children were separately rushed to hospital by well-wishers,” he said. “The accident victims were members of the Vadzidzi Apostolic Church who were going to Gowora for a camp meeting. The accident occurred around midday and we all rushed to the scene to assist.”

Police Chief Superintendent Ephraim Nyakata attended the scene and confirmed that the accident was caused by a tyre burst.

“Thirteen people died in the accident and others were injured. Our observation as the police is that there was a tyre burst and the vehicle veered off the road before smashing on a tree,” he said. “That resulted in the deaths and injuries.”

Chief Supt Nyakata urged motorists to remove the tyres on vehicles they buy from Japan and replace them with new tyres designed for tropical roads.

Crash victim in need of help