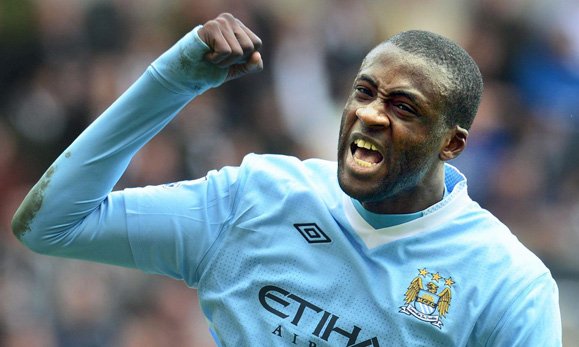 MANCHESTER City midfielder, Yaya Toure, is one of a galaxy of English Premiership stars who have gone on cyberspace to throw their full support behind Benjani Mwaruwari’s testimonial at the National Sports Stadium on Saturday.

The Ivorian midfield powerhouse, who was inspirational as Manchester City ended 44-years of waiting for the English Premiership trophy, confirms on a video posted on YouTube that he will be in Harare for the fund-raising dinner dance and testimonial match this weekend.

The video, which has an Oliver Mtukudzi song playing in the background, shows the united front that the English Premiership stars have taken in support of Benjani who will wave goodbye to his local fans after quitting international football in October two years ago.

Yaya is widely regarded as the highest earning player in the English Premiership with earnings believed to be around 250 000 pounds a week and played a key role in City’s rise to the top as they beat off the challenge of neighbours, Manchester United, in dramatic fashion on the final day of the season.

Two goals in the 2-0 victory over Newcastle at the Sports Direct Arena, which analysts had painted as a very difficult assignment for Manchester City, in the penultimate weekend of the race, all but guaranteed the Citizens the big trophy.

That they wobbled at home against a gusty Queens Park Rangers and turned what was supposed to be a routine victory into a laboured triumph confirmed only in time added on, was largely due to Yaya being taken off injured during that tie.

The Ivorian, wearing a dark suit, says in the video that he fully supports Benjani’s testimonial and promises to be in Harare for the two-days of the festival. “Yes, I’m Toure Yaya, I’m supporting Foundation of Benjani on the 25th and 26th, so I will see you there,” says Yaya.

Benjani is also trying to lure his old Manchester City teammate, Micah Richards, after he was excluded from the England team to play at the Euro championships next month.

Togolese forward, Emmanuel Adebayor, who is very close to Benjani, uses the video to rally the fans to come in their thousands to support the event. Adebayor has just come from a very successful season on loan to Tottenham Hotspur from Manchester City after a spell with Real Madrid, in the previous season, on another loan deal.

Although Spurs manager, Harry Redknapp, has said they would like to keep Adebayor at White Hart Lane, he is worried that his huge wages could be a stumbling block. Adebayor, for now, appears to be focused on helping make Benjani’s farewell show a success story.

“Emmanuel Adebayor, I come from Togo,” he thunders in the video.

“I just want to say thank you to all you guys. We are here to support Benjani Foundation because I think it’s very important to support it and we are going to have a charity game in Zimbabwe on 25 and 26 of May.

“I will be there, physically, mentally, so I need you all there, we need all your support, we have to make it happen. Thank you very much, see you in Zimbabwe very soon.”

Ghanaian World Cup defender, John Painstil, who had a spell at Fulham, also rallies behind the Benjani testimonial.

“My name is John Painstil, I’m gonna be at Benjani Charity Foundation on 25th to 26th May 2012,” he says in the video on YouTube.

“We are coming there (to Zimbabwe). It’s gonna be boom, boom, boom. See you there.”

Nigerian striker, Peter Odemwingie, wearing a grey suit and a dark shirt, says he will be live at the Benjani dinner dance and testimonial.

“(On the) 25th/26th May, I will be there live in Harare, Zimbabwe, to support Benjani Foundation.”

Another Super Eagles’ forward, John Utaka, who has just powered Montpellier to the league title in France, says it’s important that the fans also come in their thousands to rally behind the project.

“I will be supporting Benjani Foundation on 25th and 26th May, I hope all you guys will come out to support along with all the other players who will be out there in Zimbabwe,” says Utaka.

“Please come, we are doing this for a very good cause.”

One of Benjani’s closest friends is former Nigerian skipper and African Footballer of the Year, Nwankwo Kanu.

The pair bonded into a unit when they played for Portsmouth and Benjani was one of the African players who organised and featured in Kanu’s testimonial in Nigeria.

Now, Kanu is repaying his close friend with a visit to Zimbabwe to feature in the testimonial.

“I’m Kanu Nwankwo, let’s come out and join hands in supporting Benjani Foundation, which is going to take place on 25/26 May,” says Kanu in the video.

“I’m Danny Shittu, I play for Queens Park Rangers and Nigeria,” he says in the video.

“It’s a charity that I 100 percent follow and 100 percent give my support because Benjani, first of all, is a nice guy, a good guy that I have known for years.

“For him to be in this position to be able to help people, to help under-privileged people, to give them things they might never have had before is such a great thing.

“So, Benjani, I’m happy you doing something like this to help other people out there and I’m 100 percent behind what you doing as well and right now I wish you all the best.”

Pascal Chimbonda, who at his peak played for Spurs, also features in the same video.

“I’m Pascal Chimbonda, I will be at Benjani Foundation 25/26 May in Zimbabwe. See you there.”

Benjani told The Herald that he was hoping to pull off an audacious coup by luring Didier Drogba to play in the testimonial.

But the odds remain long for that to come true although the Ivorian, who was the hero of Chelsea’s Uefa Champions League triumph in Munich on Saturday night, opened another window after it was confirmed yesterday that he will be leaving the Blues.

Drogba has been linked with a move to join his old Chelsea teammate, Nicolas Anelka, at Chinese side Shanghai Shenhua, on a 20 million pounds deal worth a net 250 000 pounds a week.