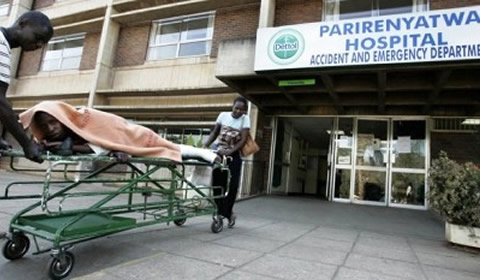 HARARE- The Parirenyatwa hospital nurse aide who claimed she was raped by a mortuary attendant in a mortuary willingly had sex with the man, but reported the issue as rape when a deal they entered into turned sour.

Regional magistrate Ms Memory Chigwaza acquitted Tapiwa Goto (26) saying it was clear Constance Katiza reported the case when Goto failed to pay her for services rendered. Ms Chigwaza noted that Katiza only reported the case after being arrested for extortion.

“It was common cause that accused and complainant came to an agreement where accused would pay compensation and complainant only made a report of rape after she had been arrested for extortion,” she said.

“It would appear that she consented to sexual intercourse and after she had been caught red-handed by the defence witness having sex in the mortuary, this may have caused her to report rape out of shame since she is married, pregnant and has a child at home.”

Ms Chigwaza took note of evidence from the second State witness who said had Katiza screamed while being dragged, she would have been heard by people moving around. The witness said even the police who are stationed 10 metres away from the mortuary would have heard her screams.

“It was common cause that the act was interrupted by the defence witness. However, complainant didn’t alert him about the sexual act, instead she combed her hair and took her clothing,” said Ms Chigwaza.

“The court wonders why complainant didn’t scream to alert people.”

Katiza had told the court that she did not scream because she thought no-one would come to her rescue since people would assume the screams were from someone with a deceased relative.

“A cry for help when someone is in danger is different from a cry for a deceased relative,” said Ms Chigwaza.

“Since she did not cry, the court will believe what the accused said, that the complainant willingly got into the mortuary to have sex with him. If she had been raped there was no need for her to agree for compensation in order for her not to report the case. There was nothing for her to negotiate with a rapist, therefore accused is found not guilty and acquitted.”

Prosecutor Mrs Tinashe Makiya had alleged that on October 1 last year at about 6:30pm, Katiza met Goto in the corridor at their workplace and grabbed her handbag. Katiza resisted, but she was overpowered and Goto dragged her into his office which is in the morgue. Goto was alleged to have indecently assaulted her before raping her.

During the incident, a workmate Mr Stan Chikondo knocked at the door and Goto got up and put on his clothes and Katiza followed suit. After a minute, Mr Chikondo got inside the room and saw Katiza crying and asked what was happening. Katiza told Goto that she was going to inform the matron about the incident and he followed her.

Along the way, Goto pleaded with her not to report the matter. Katiza proceeded to the matron’s office who later summoned Goto. Goto agreed to having sex with Katiza but apologised saying he would do “something” for the complainant. On October 4 the same year, Goto’s wife phoned Katiza telling her she wanted to discuss the issue.

But Katiza reported the case to the police as rape after failing to get hold of Goto and his wife to receive her compensation.