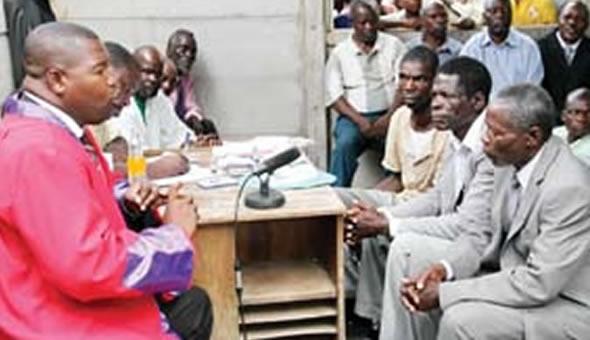 Tsvangirai last year allegedly married Locadia Karimatsenga in November resulting in Luscious Chitsinde, who is chief Negomo, fining him for breaking cultural laws that prohibit such acts in the month. Tsvangirai denied ever marrying Karimatsenga, insisting he had only paid damages for impregnating woman.

Negomo fined Tsvangirai two cows and two sheep, 10 metres white cloth and some snuff for spiritual appeasement and land cleansing last December. In his bid to execute the ruling, Negomo approached a Bindura magistrate in December last year to confirm the default judgment and Tsvangirai, through his lawyer Selby Hwacha, in March challenged the ruling.

A provincial magistrate agreed with Hwacha, resulting in the case being forwarded to the High Court. Yesterday, Negomo accompanied by his aide Dugmore Chimukoko, filed his appeal at the Supreme Court claiming Justice Patel undermined his authority. Negomo now wants the Supreme Court to confirm the ruling he delivered in December last year at his traditional court at Gweshe Business Centre.

“What the High Court sadly did by that irregular precedent was akin to say that a chief should stand idle when abominations are committed in his area until someone complains,” read Negomo’s court papers. He said Patel’s ruling renders traditional leaders useless as the procedure he demanded was inapplicable to them.

“That common law rule is not applicable in customary law. That is why chiefs are not asked to recuse themselves when presiding over cases where their relatives within their areas of jurisdiction appear before them,” said the appeal by Negomo.

Negomo further claims that Justice Patel did not dispute Tsvangirai did marry in the month of November and was not against the traditional law which puts the month as a taboo.

“The High Court did not say that what the Respondent did by marrying in a sacred month of November is taboo but demands a plaintiff separate from the chief as he is a presiding officer,” read Negomo’s court papers.

Since December last year, Negomo has been involved in a legal battle with Tsvangirai after he supposedly married Karimatsenga. In his appeal papers, Negomo said Patel’s ruling undermined his authority as a traditional chief over his subjects and customs. Negomo defended the use of Morris Nyikadzino as the appellant in the High court.

“The High Court misdirected itself in speculating on the identity of the Plaintiff as a result of its failure to correct the error committed by the provincial magistrate of not affording the Appellant the right to make representations and therefore failed to appreciate the fact that Morris Nyikadzino being the Ancestor of the Negomo clan, is the name used to represent Chief Negomo,” said Negomo.