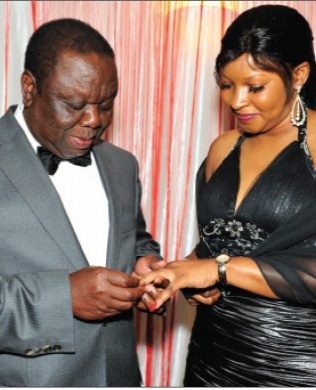 Clad in a swanky blue outfit, she looked elegant as she sat next to her man. The two constantly whispered, leaving Elizabeth in blushes. Tsvangirai announced his engagement to Elizabeth at a private function last Friday evening.

People on the street have not quite met her, but they told the Daily News in snap interviews yesterday that settling down could be good for Tsvangirai, who was fast gaining the reputation of a playboy.

Nelson Viya, a Harare-based businessperson said it was overdue for Tsvangirai to settle down, considering his position both in government and in his MDC party.

“It is a good thing because it shows some decency. He has been reported in the media to have a number of women and so it is good that he is now settling down,” said Viya.

Airtime vendor Munyaradzi Musvipa said Tsvangirai should have settled down a long time ago as it helps build his political profile as a caring husband and father.

“Staying single is a disadvantage to his political life. I think he has done himself justice. I would like to congratulate him,” Musvipa said.

Another vendor who identified herself Lucy said while she sympathised with Locadia Karimatsenga, who was turned down by the premier last year, it was important for Tsvangirai to have a wife and disassociate his name with immoral behaviour.

“As a woman, I think he was very unfair to Locadia. But because I am not privy of what happened, I think this engagement is a good development,” she said.

Locadia was left in the wilderness after she unsuccessfully eloped to Tsvangirai’s rural home to force marriage after claiming the premier had impregnated her. Her family claimed Tsvangirai paid lobola, but the former trade unionist said he had only paid compensation for making her pregnant.

Fishing in Zanu PF’s pond appears to appeal to Tsvangirai, who has suffered harassment, including beatings, verbal abuse and imprisonment at the hands of the same party since forming his MDC in 1999. Locadia was sister to Zanu PF MP for Goromonzi Biata Nyamupinga.

Elizabeth is daughter to senior Zanu PF politician and former mayor of Chitungwiza Joseph Macheka. She is also the former wife of the late Air Force of Zimbabwe wing commander Mabasa Simba Guma, who died in a car accident along the Harare-Bulawayo road in 2002.

Ironically, Tsvangirai also lost his first wife Susan in a tragic road accident in 2009, a month after the formation of his coalition government with President Robert Mugabe. His father-in-law to be is still a beneficiary of appointments criticised by the MDC as part of Zanu PF’s patronage system.