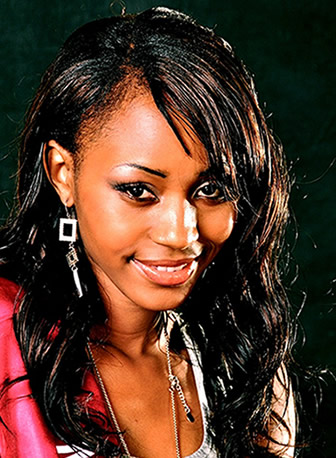 Vanessa Sibanda has denied reports that she bleached her skin and instead blamed her fair complexion on her long stay overseas and loss of her tropical suntan. The 23-year-old former beauty queen insisted that she uses natural beauty products and eats healthy food.

“What? Bleach my foot. I don’t bleach and besides why would I do that?” she asked. “What I can tell you is that I eat healthy and drink lots of water.

“But the other thing is I have been travelling abroad since I left the country and the weather there is different from home so naturally your skin gets fair I suppose,” she said. With a nose ring and long Brazilian weave, Queen Vanessa — as she is popularly known — has spruced up her looks.

“Please this is just me Vanessa that you used to know I don’t think I’ve changed,” she said. While her love life is blossoming so is her music career. This week Queen Vanessa revealed that she had found her “Mr Right” and was ready to settle down and have children.

“I love children, I mean lots of children because I enjoy being a mother,” she said. Although she didn’t name the lucky guy only time will tell who the groom will be when she finally decides to exchange vows. But this should be anytime after the release of her album.

When that happens, Queen Vanessa will follow in the footsteps of the other former beauty queens like Angeline Hundah (nee Musasiwa) and Elsie Muringani, who married cricketer Stewart Matsikinyire whose marriages have been successful long after their reign.

Angie, the Miss Zimbabwe 1994 is now settled in Nigeria with her husband Joe and their two children Andile and Ayanda.

Currently enjoying a fair share of airplay with the hits singles “Hey Lover” featuring Buffalo Souljah, “Babe Babe Babe” and “Done With Your Lies”, Queen Vanessa is busy with her music career rather than the catwalk.