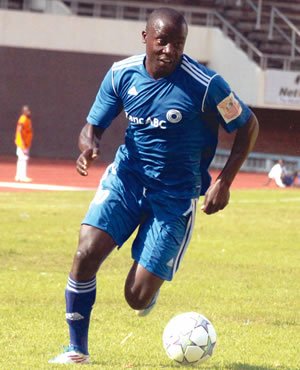 DYNAMOS coach Callisto Pasuwa will take a huge gamble by including injured striker Takesure Chinyama and Milton Makopa in his travelling party set to depart today for a Champions League tie against Esparance of Tunisia on Saturday.

The two players failed to complete the match during their 4-1 win over Black Mambas in a Castle Lager Premier Soccer League tie at Rufaro on Sunday after sustaining injuries. Chinyama was on target before he was pulled out in the 75th minute for Martin Vengesayi while hardman Makopa had earlier on been replaced by Devon Chafa in the 41st minute.

Yesterday, both Chinyama and Makopa did not feature in the club’s training session as Pasuwa made a final assessment of his troops for the tour to North Africa.

Pasuwa was expected to name his travelling 18 players last night with veteran goalkeeper Washington Arubi, set to join Makopa and Chinyama for the trip.

The win over Black Mambas, Pasuwa said, was big morale booster for DeMbare ahead of their Champions League game. Before the victory yesterday, Dembare’ confidence had been falling after they lost to Motor Action in the Independence Trophy semi-final before losing the third place-play off to Hwange. The Harare giants had also lost a league match to Monomotapa to pile on the pressure for Pasuwa.

“The victory yesterday (Sunday) came against the backdrop of those defeats. So, in a way, it has brought back the confidence in the guys. The boys had been trying much but the results were not coming their way but it was important to keep trying.

“The victory was crucial in that it showed them that the goals should not only come from one player but every one can score,” said Pasuwa.

Chinyama has been scoring regularly for the Glamour Boys. But, on Sunday, Denver Mukamba and Rodreck Mutuma managed to break their duck this season. Midfielder Mukamba scored the opener in the 6th minute before Mutuma weighed in with his brace.

“I am sure every will be playing the ball to the man who is in the best position to score. We have been talking about it, what was important was to get the first goal,” said Pasuwa.

Against Esperance, Pasuwa said, they will fight for a win.

“We going to fight for a positive result which should be a win. I have not had a chance to look much into how they play because we have not been able to get some video footages of their games. So it’s an unknown team to us but we will take a cautious approach in the first half and then make the necessary game plan in the second half,” said Pasuwa.

Esperance are the African Champions League holders and have also won the competition before in 1994.

Dynamos’ best run was losing in the final to Asec Mimosa. DeMbare’s last visit to Tunis for a date against Esperance came during the Champions League Group stage in 2010 when the team met in Pool A. The Zimbabweans lost the away tie 3-0 with Bouzza Feham scoring a brace while Yousef Ghazahi added the other goal.