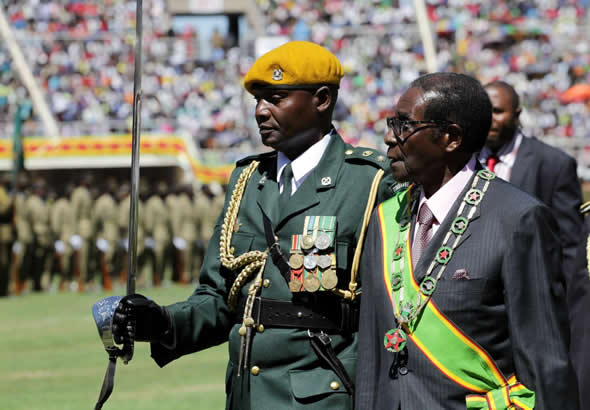 HARARE— Zimbabwe’s president, appearing uncharacteristically conciliatory, said Wednesday that political violence must be “buried in the past” to move the nation toward free and unhindered elections.

In a rare departure from his usual finger-pointing at opponents and critics, President Robert Mugabe, addressing celebrations marking 32 years of independence Wednesday, acknowledged that violence and intimidation have long blighted campaigning.

He said he asked politicians vying for office to look back at how “we have done wrong to our people” through violence and “fighting among ourselves.” Mugabe’s party militants and loyalists in the military and police have been blamed for much of the violence and political intimidation that have plagued elections since 2000.

“We must now take absolute care and caution and ensure the fights of yesterday are buried in the past,” he said. Mugabe, 88, in a conciliatory and often faltering address of 50 minutes — shorter than his usual, fiery 90-minute public speeches — said voters should be allowed to join and freely vote for the party of their choice.

“All fights, all struggles that were violent should not be allowed,” he said. Political party membership “should never be forced. We organize ourselves on the basis of freedom of choice, belonging to a party of choice and freely voting for the party of choice.”

Mugabe’s party has frequently been criticized for coercing electors to support it and using emergency food aid as a political weapon to garner votes. Disputed and violence-ridden elections in 2008 led to a power-sharing coalition with former opposition leader Morgan Tsvangirai, brokered by regional mediators the following year.

Mugabe said Wednesday he was pleased to see Tsvangirai — now the prime minister — and coalition leaders at the packed 60,000-seat Chinese-built stadium for the independence day celebrations, parades and sports.

Tsvangirai’s Movement for Democratic Change party had expressed concern over the focus of Wednesday’s celebrations on Mugabe’s policies of black empowerment and the proposed seizures of 51 percent of foreign and white-owned businesses. Tsvangirai, in his anniversary message Tuesday, described that theme as “repugnant” and likely to again scare off much-needed investment.

He said fighters who died to end Britain’s colonial rule in 1980 “will only be proud of us if we bring back the noise in our silent factories,” attract investment and create jobs and economic growth. Associated Press

Timmy says have something to fall back on