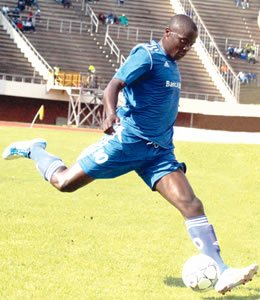 From Roy Matiki in MAPUTO, Mozambique

DYNAMOS coach Callisto Pasuwa believes his players have the capacity to finish off Mozambican champions Liga Muculmana when the two sides square off in the second leg of the Champions League first round at Rufaro in a fortnight after the two sides drew 2-2 in Maputo on Saturday.

During Saturday’s first leg, Pasuwa twice saw his players allowing Liga Muculmana to come from behind to force a draw. However, the DeMbare gaffer reckoned that the two away goals that his side scored would be vital in the second leg. Pasuwa said after playing Liga Muculmana in the first leg, he now knows their strengths and weaknesses. He feels that Muculmana, who have good ball passers, are effective on both wings and keep possession well.

However, Pasuwa noted that their opponents are defensively poor and would capitalise on that given that they will be playing an attacking formation in the second leg.

“After the match, I told my players to learn a good lesson from Motor Action who after drawing away in South Africa were complacent in the second leg in Harare and paid the price after being dumped out of the Confederation Cup by Black Leopards,” Pasuwa said. After using giant striker Takesure Chinyama as a lone striker in Saturday’s match, Pasuwa indicated that he would be using two strikers as they would employ an attacking formation in the second leg at Rufaro.

Pasuwa challenged his midfielders as they were overpowered on most occasions in the first leg and wants them to improve on tracking the ball, the need to close their opponents early and not to give them too much room to manoeuvre. In midfield, the DeMbare mentor felt that Devon Chafa was tiring towards the end of game and was being careless with the ball, losing possession unnecessarily.

Pasuwa said after replacing Chafa with Milton Makopa, the midfield stabilised. “After the dirty tactics that were used by Liga Muculmana from the day of our arrival, I am happy that my players remained focused on the task at hand and managed to secure a positive result. During the preparations for the return leg, I will continue to emphasise that they must approach the match with a positive mind,” added Pasuwa.

On Saturday, national team goalkeeper Washington Arubi did a sterling job between the posts as he managed to thwart Liga Muculmana’s raids, especially towards the end of the match and he proved why last year he was voted the Castle Lager Soccer Star of the Year. The defensive pair of captain George Magariro and upcoming youngster Partson Jaure requires “some panel beating”.

Magariro was overworked by Jaure who was making his debut appearance in the Champions League and it took a heavy toll on him and also given the dirty tactics employed by the hosts, Jaure could not handle it. Pasuwa employed veteran linkman Leo Kurauzvione as a holding midfielder and he never put a foot wrong until he was substituted with five minutes remaining on the clock.

Dynamos Player of the Year, Tawanda Muparati, gave his best in the difficult conditions and was not moving forward much because of their formation. Midfielder Denver Mukamba had an off day, as he was struggling with Liga Muculmana’s pace in the middle of the park and most of his passes went astray. Chinyama proved to be a vital cog in the Dynamos strikeforce and he single-handedly destroyed Muculmana’s defence.

He capped a five-star performance with two brilliant goals. Meanwhile, Dynamos vice chairman Webster Chikengezha paid tribute to the fans who travelled by road to Mozambique to rally behind their heroes in Maputo. He thanked Zimbabwe Ambassador to Mozambique Agrippah Mutambara and Zimbabwean residents in Maputo for cheering the team on during Saturday’s match. Dynamos are expected back home tonight.