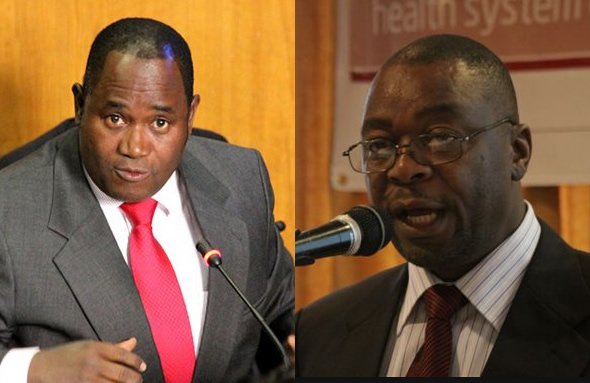 EXCLUSIVE- Reserve Bank of Zimbabwe governor Dr Gideon Gono has been secretly bedding the wife of ZANU PF’s Deputy Minister of Health and Child Welfare, Dr Douglas Mombeshora. Nehanda Radio.com can reveal that his wife Dr Millicent Mombeshora has been having an affair with Gono for over 10 years now.

The first hint of this affair came when Gono’s former adviser of 8 years, Dr Munyaradzi Kereke wrote an angry letter sensationally alleging that Gono stole millions of dollars and gold from the bank. Kereke has also made claims that he is the one who wrote the examinations which earned Gono a doctorate degree.

But it was allegations by Kereke that Gono “took tens of millions of cash through the Security Division of the RBZ for personal gain.” Kereke wrote “I will also not hesitate to reveal and expose how you used RBZ money to buy two houses as “gifts” to the wife of a Deputy Minister here in Harare.” (see full letter by Kereke).

It was this letter that got Nehanda Radio.com working on the case. Millicent Mombeshora, formerly known as Millicent Buzuzi is a former DJ and head of ZBC’s Radio 3. She is currently the Head of strategic planning and special projects, working in the so called ‘Governors Office’ with Gono. Millicent is also a commissioner on the Zimbabwe Media Commission.

“Gono and Millicent are so in love, the affair has been burning for over 10 years. They regularly hire hotels where they meet. It’s hard to believe a married woman like Millicent is so jealous of Gono. When she hears rumours of him bedding other women, she gets very upset,” a source close to the two told Nehanda Radio.com.

Millicent’s husband Dr Douglas Mombeshora, is the Member of Parliament for Mhangura. “He is a nice man who does not deserve this nonsense. You never hear stories about him being involved in political violence or the corruption associated with Zanu PF. But his wife is a nasty piece of work,” our source said.

“When Millicent reads this article she will know who leaked the story and how I know without doubt the two are having an affair. I’ve kept my silence for a very long time but I don’t think its fair on Douglas. For the avoidance of doubt the Deputy Minister must insist on DNA tests for his last 3 children.”

Several years ago Millicent was linked to an attempt to smuggle 140 tonnes of wheat out of the country which resulted in her husband being questioned by police. One Moses Banda was arrested and charged for obstruction of justice through misrepresentations after trying to cover up for Millicent.

Millicent owns Rukute Farm in Makonde, where the wheat had originated from. Wheat is one of several specified products in Zimbabwe restricted from exports. Nehanda Radio.com