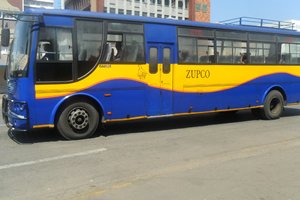 HARARE- ZUPCO is recalling over 400 former workers to operate its new fleet of buses as the firm begins to operate viably. The bus company has ordered 100 buses from China at a cost of US$7 million to increase its fleet to 214.

Acting chief executive Mr Nelson Kangausaru last Friday said the buses were expected in the country soon. “We are in the process of recalling some of the retrenched and experienced employees who have a clean record. The recalled employees will be attached to the new buses,” he said.

The company plans to buy 100 new buses every year. Last year, Zupco bought 104 buses from FAW. At its peak, Zupco had more than 400 buses, which crumbled because of corruption and gross mismanagement. Worse for the company, Zanu PF regularly commandeered its buses for party functions without paying.

Local bus manufacturers charge between US$180 000 and US$230 000 per bus, implying that for every bus bought locally, Zupco can buy three from China. Mr Kangausaru said the company will continue buying 100 buses each year to replenish the fleet. The 114 buses ply inter city, rural and regional routes only.

There are no immediate plans to reintroduce intra-urban services. Each bus is operated by four people and is expected to bring in US$20 000 every month.

“Our major emphasis is on the rural routes which have been shunned by other operators. We have modified the buses to ensure they are suitable for the rough rural terrain. Some of the buses meet the target while others struggle,” he said.

In the short term, it was not viable to reintroduce intra-urban services because of the stiff competition from small commuter omnibus operators. “Our strategy is on survival. We cannot think of urban routes or introducing automated ticketing. We just have to survive,” he said.

He said the company will not be declaring dividends to the Government this year, with the funds earmarked to increase its fleet.

Local Government, Rural and Urban Development Minister Ignatius Chombo, under whose purview Zupco falls, recently told Parliament that he was satisfied with the pace at which Zupco was being resuscitated. Minister Chombo said this while giving oral evidence before a Parliamentary Portfolio Committee.