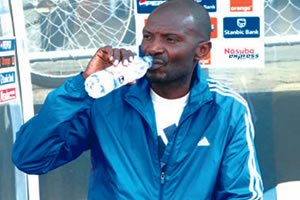 DYNAMOS coach Callisto Pasuwa has expressed concern over his side’s lack of firepower in front of goal following their defeat to Gunners in a friendly match at Lafarge yesterday.

The Harare giants who were stunned by a Munyaradzi Chiwara 44th minute strike ended on the losing side following yet another blunt performance in the face of goal despite creating a handful of chances.

Pasuwa revealed his sentiments when he watched his charges fail to score in two preparatory games at the weekend, beginning with a 0-0 draw against Monomotapa at Rufaro on Saturday and then in the defeat to Gunners yesterday.

The Dynamos coach, however, said he had seen positives and said they will have to work hard to sharpen their frontline ahead of the domestic and Champions League campaigns which starts in the next two weeks.

“This game was different from the one we played on Saturday because at least we were venturing forward. We were getting there but we couldn’t convert the chances,” he said.

“I am worried by the lack of goals. We need to work hard on the strike force. It is a cause for concern that we are not putting the ball into the back of the nets. We need to improve on that, even the half chances we get. Look at Gunners, they got their chance and scored,” said Pasuwa.

“I think the difference of Cuthbert’s (Malajila) hard work is now showing. We are moving into the positions but we are not increasing our tempo when going forward.”

Dynamos however had the better exchanges in the opening half with young midfielder Farai Mpasiri causing problems to the Gunners defence from the right wing while Takesure Chinyama was always a handful to the defenders. But the goals were just not coming, and not even the second half introduction of Roderick Mutuma and Tineyi Chitora could change their fortunes in front of goal.

Gunners, to their credit, got their chance and buried it although it appeared a bit controversial since the referee Nomore Musundire had blown for an infringement before the shot was taken.

Chiwara took advantage of the situation when Gunners’ chief striker Leonard Fiyado, who was quiet for the better part of the game, took two defenders head-on and was fouled in the process at the edge of the box.

The midfielder then took his chance and struck hard to the far right of the diving goalkeeper George Chigova and gave Gunners the lead just before the half-time break.

DeMbare had a better chance in the 20th minute when Mpasiri, who had a good afternoon on the flank before fizzling out in the second period, beat his marker on the right and sent in a low cross that was intercepted by defender Byron Madzokere for a corner.

Gunners had their second chance after the restart when Fiyado kept the ball in but midfielder Willard Gondo could not quite reach for the ball with a sliding effort. Gunners who dominated the midfield had a good game in the second period and they did well to maintain their lead.

Second half substitute William Manondo had his chance when he broke through the middle but Chigova saved the situation when he pulled off from his line to clear the danger.

Then Chitora who replaced Mpasiri in the 72nd minute shot wide with his first touch after being set up by Chinyama and again had his effort saved by the goalkeeper Prosper Chigumba after out-jumping the Gunners defenders and connecting a header in the 81st minute.

Mutuma also had his chance but headed straight into the arms of the goalkeeper in the 78th minute. Chigumba also made a good save when he dived to his right to stop Devon Chafa’s ferocious grounder at the stroke of full time.

“It always feels good to beat Dynamos because it’s something that boosts the players’ morale and confidence. Yes we won but there are still some areas we need to work on. Our finishing needs polishing,” said Madira.