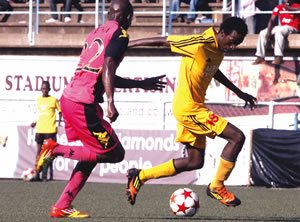 From Tobias Mandoreba in HWANGE

HWANGE cruised into the Caf Confederations Cup first round with a demolition show against their Zanzibari counterparts after a preliminary round second leg soccer tie at the Colliery yesterday.

The coalminers carried a healthy 3-0 advantage after teaching their little-known opponents a free football lesson in their own backyard a fortnight ago.

Had Hwange been more lethal in front of goal in yesterday’s match that was played before a packed stadium, the scoreline could have reflected a rugby match as Jamhuri were missing in action from the first whistle.

Just after five minutes, Hwange asked the first questions as lanky defender David Borowondo completely missed the ball in front of a yawning goal as he attempted to connect a curling corner by Munyaradzi Mungadze.

Three minutes later, big striker Allan Tavarwisa followed that up with a glaring miss after he had pounced on a spill by the visitors’ goalminder Jaffar Said Talib who failed to deal with a harmless-looking effort by Hwange’s Ocean Mpofu.

To their credit, the visitors had their first crack at goal after 10 minutes when Iddi Ramadan Salim shrugged off a challenge by Eric Chipeta at the edge of the box to release a snap shot which found agile Hwange goalkeeper Petros Mhari alert.

In the 24th minute, the hosts’ script of missed chances continued when Nkosana Siwela, who had a quiet afternoon by his own standards, latched on to a loose ball at the edge of the box, only to direct his effort sky high.

There was, however, no denying the hosts a goal two minutes later when Tavarwisa scrambled the ball into the back of the nets in a goalmouth melee after the Jamhuri rearguard failed to deal with a Tonisani Sibelo in-swinger.

The coalminers continued to harass their opponents, but chance-after-chance went begging with Tavarwisa and Fransesco Zekumbawire being the chief culprits.

The Hwange fans’ frustrations over missed opportunities were calmed by captain Rodwell Chinyengetere who doubled the hosts’ advantage at the stroke of half-time by complementing Siwela’s dazzling artistry on the left flank as he connected the dreadlocked midfielder’s sitter into the back of the nets.

Hardly a minute after the breather, Jamhuri found themselves 3-0 down after Hwange’s most outstanding player of the afternoon Ocean Mpofu almost tore the nets with a ferocious 30-metre free-kick which left the goalkeeper rooted on the same spot.

It was over for the team from Zanzibar and after this goal they simply decided to turn the game into a kick boxing contest with some needless flying tackles which saw Ali Othman Mmanga and Steiman Ali Nuhu being shown yellow cards by a rather lenient Botswana referee Leso Kutlwano.

More misery was to follow for Jamhuri as they conceded another goal in the 72nd minute after Mpofu completed his double with a lovely lob past an outdrawn Jaffar Said Talib to send the home fans into delirium.

The hosts, however, put their foot off the pedal and this allowed the visitors the opportunity to grab a consolation goal in the 84th minute through the boot of Ali Nuhu.

This was after substitute Oscar Lungu gifted the visitors with an early Christmas present when his blind pass was intercepted by Ali Othman Mmanga who quickly released Nuhu who obliged by making no mistake from close range.

There was another chance for Chinyengetere at the death of the game but the midfielder’s powerful shot missed the left upright with the goalkeeper diving in vain.

Hwange’s next opponents are El Amal from Sudan during the weekend of March 23-25 and the coalminers’ head coach Nation Dube is ready for the challenge.

“We are happy to have qualified for the next round which we know would more tough against the Sudanese. We will play to get a result in the first match so as to have an edge in the return leg.

“Today the boys were very wasteful and I think it’s because of the psychological advantage we carried from first game, but overally we are pleased as a team,” Dube said.

His opposite number Renatus Shija chose to lay blame on fatigue on the short 100km distance from their base in Victoria Falls when his lads had in actual fact performed badly in the first leg at home two weeks ago.

“My boys were tired after the trip from Victoria Falls and it contributed towards their poor performance. I am disappointed because it had a bearing on our show today,” he said.