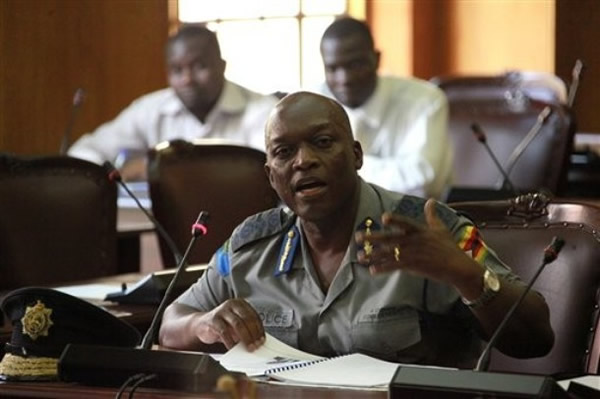 HARARE – Police commissioner-general Augustine Chihuri is involved in a nasty fight with women activists who claim police are forcing them to remove their underwear in dirty police holding cells, while withholding sanitary wear for menstruating women.

Lawyers for the women are now targeting Chihuri for legal action after he admitted to holding female suspects in male prison cells and vowed not to provide sanitary wear for the inmates.

So appalling are the conditions at Harare Central Police Station holding cells that one of the women taking Chihuri to court says she was advised by a male police officer to use bare hands to clean herself after using the toilet because there was no toilet paper, according to court papers.

From being forced to walk barefoot on dirty floors, being surrounded by human waste, flowing urine of “various colours”, chocking smell of human excreta to being denied sanitary wear for menstruation, the women activists describe their ordeal as “dehumanising.”

Phone Hacking: Kembo Mohadi is not the last… you can…

Mnangagwa got rid of Mohadi to secure family business…

Williams was arrested together with 21 other women activists and detained at Harare Central Police Station for demonstrating against electricity cuts affecting the country in 2010. Chihuri and co-Home Affairs ministers Theresa Makone and Kembo Mohadi are cited as respondents.

In his response, Chihuri denies that women are forced to remove their under garments when they are in detention but defended police refusal to provide sanitary wear on the basis that inmates are held for only 48 hours. Lawyers have now queried whether Chihuri knows what it means to be menstruating for 48 hours and the serious health implications that come with it.

“He does not know what it means to be menstruating for 48 hours. As a matter of fact, depending on the circumstances, the environment and the density of the flow, the 48 hours may be all it takes to complete the menstrual process.

“In short, sanitary wear for menstruating women in police custody is an absolute necessity,” said Advocate Lewis Uriri, in his head of arguments to the Supreme Court. Uriri is representing the Woza activists.

“The contention (by Chihuri) appears to be that sanitation for detained menstruating women is not necessary in any period less than 48 hours,” Uriri added. Williams claims that the toilets in the holding cells were flashed from outside, and were thus flushed at the pleasure of the officers, leaving human waste to flow into the cells.

“During the night, I intended to relieve myself and discovered that the toilets were inside the holding cells. In order to use it, I had to wade through a pool of urine. Further, the toilets had no running water and were already full with human waste,” Williams said.

She added that it was dehumanising to use the toilet in full view of all detained persons because the toilet bowls were not partitioned from the rest of the cells.

“It is common knowledge that women have specific health hygiene needs related to their reproductive health, and these include sanitary and washing facilities, safe disposal arrangements for the blood strained articles, as well as provision of hygiene items, such as sanitary towels,” she said.

Williams said the holding cells did not provide soap for detainees to wash their hands after using the toilet.

“During the night, I requested some blankets for warmth in the night and was given blankets which were reeking of urine. The police availed three blankets, despite the fact there was now a total of 16 detainees. The blankets were clearly inadequate given the number of people in the cell and their usefulness was further negated by the strong urine stench,” said Williams.

She claims she was never given food and drinking water in the cells and had to rely on hand-outs from friends and relatives. Moreso, the food was provided in the same cells with flowing human waste. Williams also lamented the lack of gender-sensitive amenities which she said was in favour of men without taking into account to women’s specific needs.

Advocate Uriri, said by admitting that the police do not provide sanitary wear to arrested women, a specific provision for women, Chihuri was admitting to gender discrimination.

“This amounts to discrimination on the basis of sex. In short, the second respondent contends that the cells were made for men and that, women, their biological differences notwithstanding, must make do with that which is specific for men,” Uriri argued.

“The Universal Declaration of Human Rights provides, inter alia, that the law shall guarantee to all persons protection against discrimination on any ground including race, colour and sex,” he added.

Chihuri, however says providing sanitary wear and providing bedding facilities to detained women was an administrative issue that the police force could do nothing about. He maintained that the police was doing all it could within its mandate.

He urged the Supreme Court to visit the holding cells and make an assessment of the facilities before ruling on this matter. Chihuri dismissed most of Williams’ claims as false, saying inmates could have died of various diseases if the conditions were that bad.

“The officer-in-charge arranges for cells to be inspected daily after scrubbing out daily. Exercise yards and surroundings are swept out daily by the general hands and are inspected simultaneously with the cells,” wrote Chihuri.

Phone Hacking: Kembo Mohadi is not the last… you can be next

Mnangagwa got rid of Mohadi to secure family business interests