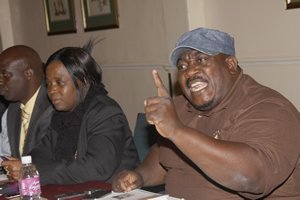 HARARE- Raymond Majongwe, a leading critic of President Robert Mugabe’s regime says his life is in danger after his office keys and a folder were mysteriously taken from a locked bag by national airline officials.

Majongwe who is Secretary- General of the breakaway formation of the Zimbabwe Congress of Trade Unions (ZCTU) led by Lovemore Matombo was in South Africa recently attending a Crisis Coalition meeting.

He said his bag, which was hand luggage, was taken by South African Airways staff soon after he arrived back.

“I was coming from a meeting in South Africa and my bag which was hand luggage was taken by officials saying there was no longer any space for my bag …when I got home I discovered that a folder that I was carrying which, I was given by Crisis Coalition and the office keys were missing in the bag.

The keys were recovered yesterday late afternoon. Majongwe said they were people abusing airport facilities and warned that as long as people let airline officials handle their luggage; their stuff can be tempered with.

“My greatest fear is that it’s clear that somebody took these keys and duplicated them. I am going to take every step to make sure that our offices are secure because it’s not a coincidence that keys just disappear,” said Majongwe.

The ZCTU secretary general said he did not make a police report as doing so was just a waste of time. “I am not naïve and will not waste my time because the next thing they will start asking when I get there, is which meeting I was attending and with who,” he added.

The Airline officials failed to explain how the keys got into their offices with Air Zimbabwe Chairman Jonathan Kadzura saying “those are operational issues I know nothing about it.” Nehanda Radio.com