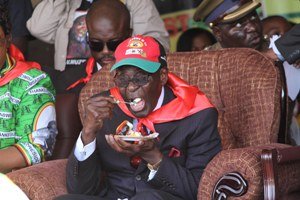 HARARE- President Robert Mugabe yesterday said he is still traumatised by losing the 2008 election to Prime Minister Morgan Tsvangirai especially in Manicaland, a province from which most guerrillas in the 1970s liberation war came from.

He was speaking at his 88th birthday celebration bash in Mutare attended by thousands of his supporters excluding his wife Grace and daughter Bona. Sixty cattle were slaughtered to feed the crowd.

“I am not happy that 20 out of the 26 seats in Manicaland voted MDC-T,” he said. “It was a shock. I did not understand what had gone wrong,” said Mugabe who attributed the loss to divisions within his party.

The war was mainly fought from bases in Mozambique which borders Manicaland hence a huge number of guerrillas came from that province. Mugabe said he was shocked to lose the 2008 elections to Tsvangirai’s MDC-T, as he had taken it for granted that Zimbabweans overwhelmingly supported him and Zanu PF because of its liberation war credentials.

He said the electorate also punished Zanu PF for imposing candidates who were easily beaten by MDC-T candidates. An estimated 60 cattle were slaughtered to feed guests at the lavish party which resembled election campaign rally.

An estimated 60 cattle were slaughtered to feed guests at the lavish party which resembled an election campaign rally. Top government officials and other VIP’s were treated to a sumptuous three course meal at two local hotels, while the ordinary people scrambled for food at a nearby teachers college.

Four huge birthday cakes depicting natural resources in Manicaland were on display at the centre of the stadium where they were guarded by up to 10 state security agents.

The bash was estimated to have cost US$500 000 but other media reports say the party could have cost up to US$1 million. Most Zimbabweans are struggling to survive due to economic problems and diseases such as typhoid and HIV and Aids. More than 80% of the people survive on less than a dollar a day. Thousands of villagers in the countryside are surviving on one meal a day supplied mostly by international charitable organisations.

But what surprised many was the noticeable absence of the First Lady, Grace, at such as important event for the Mugabe family. But Mugabe, only accompanied by his two sons, Robert Junior and Chatunga and Vice-President Mujuru, downplayed his wife’s absence.

He told the gathering that the First Lady was away in Singapore where she accompanied daughter Bona who is doing her studies in the Far East. Vice President John Nkomo could also not make it to the feast as he was said to be too ill to attend.

Thousands of people donning Zanu PF regalia, the new Gushungo label and school uniforms packed Sakubva stadium in Mutare to get a glimpse of the ageing leader and a chance for free food and entertainment.

Mugabe kept guests waiting for several hours, arriving at the venue of the celebrations shortly after 1 pm to a rousing welcome by his supporters. There were chaotic scenes and a near stampede as security struggled to control the crowd as Mugabe walked round the stadium to greet ordinary people seated on the terraces.

Speaker after speaker took the opportunity to declare their loyalty to Mugabe by denouncing his main rival, but partner in government, Tsvangirai of MDC-T. guerrillas came from that province. Zimbabwe Standard