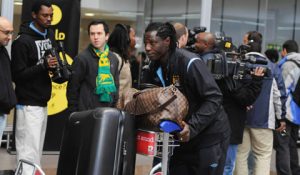 ZIFA president Cuthbert Dube and chief executive Jonathan Mashingaidze are expected to meet with former Warriors skipper Benjani Mwaruwari today amid revelations that the association wants to honour the Portsmouth striker by giving him a big role to play in the national game.

Benjani flew into the country at the weekend from his base in England, the same period that Dube also returned from a business trip abroad which included attending the 34th Confederation of African Football Congress in Gabon and the Nations Cup final won by Zambia in the same country.

It has also emerged that Benjani,  who retired from the Warriors towards the end of 2010, has been in constant touch with the Zifa leadership on the role that he could play for the senior team and the national game at large. Benjani is also working closely with Zifa for the staging of his testimonial match, which has been tentatively set for May 26.

But the issue of the testimonial game and the function that Benjani will play for Zifa and domestic football is set to become clearer today when the England-based forward meets with Dube and Mashingaidze.

Mashingaidze, in confirming the indaba, said Zifa are eager to capitalise on some of the game’s finest sons by helping them give back to the domestic game. The Zifa chief executive said they were aware that not all former Warriors could become national coaches but noted that there are different roles, which they could play for the benefit of the local game.

“Benjani is around and wants to hold a testimonial match on 26 May and he will meet the Zifa president and myself tomorrow to discuss what role he can play in future Warriors campaigns.

“We want to maximise on his availability to help, he has his ideas on how best he thinks he can assist us and we also have our ideas so basically the meeting is about his role in the FA.

“Benjani is just but a start, we want to tap into all our great sons of this country. It doesn’t mean that all of them will go into coaching when they retire from the game, there are numerous roles they can play and we believe they can be great football ambassadors of this country . . . there is a lot they can do in terms of profiling, marketing being role models and helping secure partnerships for our football,” Mashingaidze said.

The Zifa chief executive also revealed that his association was eagerly awaiting the start of the Warriors camp this afternoon for their 2013 African Cup of Nations qualifier against Burundi in Bujumbura.

Mashingaidze said their anxiety stemmed from the fact that it was the first time that the Warriors were regrouping after Zifa took a drastic measure to suspend all players and coaches who were fingered in the Asiagate report.

“Two players, Arnold Chaka and Mandla Sibanda have already come in from Botswana, Musa Mguni should be coming in tonight and we are expecting the South African contingent as well as the likes of Dickson Choto to come in tomorrow so that the squad can begin training at Rufaro tomorrow afternoon.

“Coach Rahman Gumbo is also coming in tonight (last night) and will hold a technical meeting with his lieutenants after which they will roll out their training programme. But we would want the team to leave for Bujumbura on Sunday 26 February. There is a lot of excitement around the start of this camp.

“It will be the first test for Zifa after the suspensions of the bulk of the players and now we will get a test of how deep our player reserves are. It’s a test on the character of those that have been called into the Warriors and it will also be a huge test to see how far we have gone in safeguarding the players and the game from cartels that are involved in match fixing.

“In fact there will be a lot of tests and the nation is waiting to see how we will kick-start the 2013 Nations Cup campaign, Mashingaidze said. Mashingaidze said despite a new team being assembled, Zifa were confident that all those that have been tasked with representing the Warriors will take pride in fighting for the country.

“We hope that the new firsts will inspire the players and the coaches and everyone involved to do well against Burundi,” Mashingaidze said.

Gumbo who will be assisted by former Dynamos coach David Mandigora flew back home last night after guiding his club side FC Platinum to a fine 4-2 away victory over Green Mamba of Swaziland in their Champions League preliminary round, first leg tie in Mbabane.