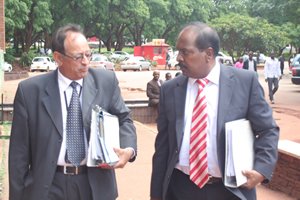 The 34th witness, a Warrant Officer in the SAPS, Seonyatseng Jack Maine who is attached to the chemical section of the forensic department, made these revelations during the 11th day of Gen Mujuru’s inquest at the Harare Magistrates’ Courts. South African experts, in their reports, said no ignitable liquids and explosives were observed on the debris.

Warrant Officer Maine was among three SAPS experts who testified yesterday and were cross-examined by Mujuru family lawyer Mr Thakor Kewada, who was being helped by SA pathologist, Dr Reggie Perumel hired by the family. In his evidence in chief, Warrant Officer Maine said he received exhibits from Beatrice Police Station on September 23 in three sealed bags.

The policeman, who has been a forensic analyst for four years and worked over eight years in chemical analysis, said he opened the three bags that contained burnt clothes, ashes and a black solid material. “I was instructed to examine the exhibits to check for ignitable liquids. These are liquids which accelerate a fire,” he said.

Asked by Mr Clemence Chimbare of the Attorney-General’s Office what he meant, he said: “When you attend a fire scene, collection and packaging is very important. Exposure to heat may affect results. They (exhibits) should be stored in a container made of metal that is not corroded or they should be put in an oven bag so that it traps the required material.”

Asked how the exhibits he got were stored, he said they were put in a plastic bag, which might have affected the results. He, however, said he was not suggesting that this is what happened in the case. “If there were any other substances, I would not have detected them because the methods I used were for liquids only,” he said.

Warrant Officer Maine said he could also not tell if there was gas on the debris. Asked by presiding magistrate Mr Walter Chikwanha if he would detect ignitable liquids if samples were taken from a place near a spot with chemicals, he said he wouldn’t.

Asked by Mr Kewada about the possibility of contamination given that the exhibits were kept in Zimbabwe for at least three weeks he said: “No as long as they were packaged well.” Earlier, the 33rd witness, Dzunisani Porcia Chauke, a Warrant Officer with the South African Police Services and a forensic analyst, said she conducted tests on the tissue of Gen Mujuru and his daughter Kumbirai’s blood sample.

On September 19 last year, their department received the samples in question and they were given to an analyst the same day. She said they extracted DNA from Gen Mujuru’s tissue and Kumbirai’s blood sample. “The tissue sample was of a man and blood from a woman. We concluded that paternity could not be excluded from the tissue and blood sample.

“The probability match was 99,9 percent and the alleged father has 1 000 times chances of being the biological father of the child,” she said. Warrant Officer Chauke said it took at least two months for them to complete the tests and it was within the normal range.

She sent the results to Zimbabwe Republic Police Forensic Science department director Mr Bethel Mutandiro first through an e-mail before a hard copy was dispatched. Lieutenant Kgotlakgomang Ariel Lenong, who is the chief forensic analyst of SAPS Scientific Analysis Department, said he received the exhibits from Zimbabwe on October 4 last year.

Lt Kgotlakgomang, who has 14 years experience of doing chemical analysis, said he was requested to examine the exhibits in question to check for explosives. He said he used two techniques to test for the explosives, one of which is chromatography and he concluded that there were no inorganic materials in all exhibits. He said his tests did not include gases.