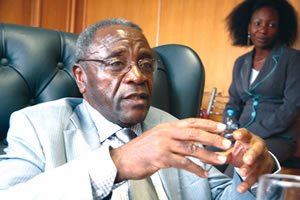 HARARE- ZIFA president Cuthbert Dube has put the record straight on the mass suspension of players and revealed that only three footballers – Method Mwanjali, Thomas Sweswe and Nyasha Mushekwi – have been blacklisted from the Warriors ahead of the 2013 Nations Cup opener against Burundi this month.

The Harare business executive said reports giving the impression that Zifa had effected a bloc suspension of the players were not only incorrect but appeared to give the impression that the association wanted to usurp the authority of Independent Ethics Committee.

The committee, led by retired Supreme Court judge, Justice Ebrahim, is set to bring the Asiagate scandal to a close. Reports, emanating from the Zifa office since Monday night, have suggested that the association had blacklisted 80 players of the Warriors until their involvement in the Asiagate scandal has been determined.

Zifa chief executive, Jonathan Mashingaidze and the board member (competitions), Benedict Moyo, have been quoted extensively in both the local and international media confirming that a blanket ban has been effected on 80 players.

Confusion, though, has surrounded the ban with some reports claiming that 67 players were affected while others claimed 82 players would not be drafted into the Warriors until they have been cleared by the Independent Ethics Committee – tasked with bringing the saga to a close.

What was consistent, in all the reports, was that the ban would only affect the players’ eligibility to play for the Warriors and not their clubs. Speculation was also rife that Warriors’ coach, Norman Mapeza, was facing the axe, with the chop expected to be hammered today, after he was also fingered in the Asiagate report.

But Zifa president Dube last night spoke for the first time on the controversy and clarified the official position taken by the association regarding the blacklisting of players for national duty.

Contradicting reports that were being thrown around pertaining the number of players blacklisted, following a Monday night indaba which was also attended by vice-president, Ndumiso Gumede, and board members Elliot Kasu and Moyo, Dube put the record straight.

The meeting, which was to review the administrative and technical performance of the national team ahead of the new campaign, was also attended by Warriors’ coach Mapeza.

And it appears the gaffer, in his report of the failed campaign, might have registered discomfort in the way his central defence and the big striker carried on with their business in Praia. Dube said Zifa had not banned any player.

“We have not banned a single player. We don’t want to interfere with the work of the Ethics Committee that is why we called them an independent body,” said Dube.

“Method Mwanjali, Thomas Sweswe and Nyasha Mushekwi’s performance in the last Africa Cup of Nations match against Cape Verde was way, way below par. It is understandable in sport it does happen that one day you can go off form.

“Even the the Mighty Warriors didn’t perform well in their recent match but it complicates things when one is implicated.  We are saying these three should definitely and officially not be in the line-up for the Burundi match until they have been cleared by the Ebrahim Committee.

“We feel the situation was compounded by the performance in Cape Verde and we feel we could have won that match and qualified for the Africa Cup of Nations.  The coach is free to select all the other players mentioned in the report. There hasn’t been anything official sent to the players clubs because doing so at this stage means we are interfering with the Ebrahim Committee.”

Dube said only after the Ebrahim Committee has determined each and every case, involving the players and officials, will a decision be reached by Zifa on the fate of the individuals.

“But let me quickly add that if the Committee comes up with the recommendations that these 80 players are guilty then they are not going to participate in the qualifiers,” said Dube.

“As the Zifa president I can categorically say that these three players, I don’t want to see them for the Burundi match.  For a player of Method’s calibre to perform like that (against Cape Verde) it raises a lot of questions.”

The Warriors hopes of qualifying for the Africa Cup of Nations finals currently underway in Equatorial Guinea and Gabon were shattered when two costly mistakes by Mwanjali saw them fall 1-2 to Cape Verde away in Praia.  Mwanjali saw his intended pass to Khama Billiart being intercepted by the Blue Sharks resulting in the first goal in the third minute.

Ten minutes later the former CAPS United defender’s poor back header intended for goalkeeper Tapiwa Kapini was intercepted and the home team doubled their lead inside the first 15 minutes. His club mate, Mushekwi, was off form in Cape Verde and was too slow to pull the trigger in the box.

The bustling striker was hauled out in the 59th minute and the coach brought in Tafadzwa Rusike. The Zifa president said the Burundi match would be the only game affected as the Ethics Committee have assured him that by March the report would have been completed.

“From the discussions with Ebrahim this whole thing should be solved by March, definitely by mid-March. Everyone is anxious -from the Premier Soccer League, Zifa and clubs – but at the same time we want a good job.

“Match-fixing is a serious crime and is complicated and there is no need to rush it and we don’t want to interfere. We would like to deal with a clean team and at the same time we are not cruel. We know that they are breadwinners and that is why we are encouraging players not be involved in such acts.

“There are players who went there (on the Asian trips) and they are innocent and we would not punish them. If the players are worried they can even get hold of me and at the same time we are calling on all players to come and give submissions to the Committee.

“This month there would be massive calling of players and it is definite that by March the report would be concluded,” said Dube.

Dube said they would be calling a Press conference as well as issuing out Press statements clarifying the position on the suspension.

The news that players like Ovidy Karuru, Khama Billiart, Edward Sadomba, Gilbert Mapemba, Willard Katsande, Daniel Veremu and Cuthbert Malajila are still available for selection will come as a huge relief to the nation which was left in shock by the Zifa’s decision.