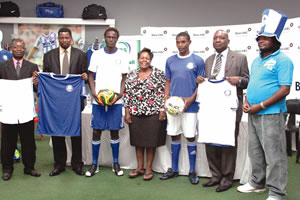 DYNAMOS plunged into the eye of a storm yesterday amid revelations that the kit donated to the club on Monday, and the prospective sale of such material, violates the Glamour Boys’ sponsorship agreement with their principal backers BancABC.

Savanna Tobacco have presented a proposal to sponsor Dynamos for US$250 000 this season with US$100 000, from that amount, being used to acquire a luxury bus for the club’s use this season although, at the expiry of the initial one-year deal, the bus will revert into Savanna property.

About US$54 000 from that package will be earmarked for advertising while the salary of the bus driver and routine maintenance checks on the bus will also have to be covered from that US$250 000.

Dynamos will get about US$70 000 for use in their commitments from that proposed deal.

Toyota Zimbabwe are also eyeing a partnership with Dynamos as part of the company’s marketing strategy for the Subaru model and they have already taken their proposal to BancABC so that the principal sponsors can weed out any potential areas of conflict.

DeMbare on Monday received two playing kits, in their blue home and white away colours, from Betta Ball Sports and assurances were given that more equipment, including training balls, bibs, cones, and bags, would be supplied in due course. The kit was sourced from China.

It was also announced, at the same function, that replica jerseys would be sourced and sold to supporters as part of a marketing venture in the countdown to the grand Golden Jubilee Celebrations next year.

However, it emerged yesterday that the donation has torched a storm given that it violated a standing agreement between Dynamos and their official sponsors, BancABC, for the bank to provide all playing and training kit and equipment this season.

BancABC, who have identified Adidas as the brand that Dynamos should use in their playing and training kit, are also in the process of securing the replicas that will be sold to the Glamour Boys’ fans.

As part of its sponsorship package, the bank also pays the Dynamos players and coaching staff their salaries, provides transport for the club and last month injected US$165 000 to help DeMbare in their Champions League adventure.

BancABC are also in the process of acquiring a sports club in the capital which will be used by the Glamour Boys as their official training ground and club house. DeMbare currently used rented facilities at Raylton for their training needs.

The Glamour Boys’ officials yesterday reached out to their sponsors, as part of a damage limitation exercise, after it emerged that the donation of the kit, and the pronouncements that it was not only the official playing kit but would also be backed by replicas for sale to the fans, was a big boob.

DeMbare chairman, Kenny Mubaiwa, told The Herald that mistakes were made during the ceremony where the kit was presented because some of the things related to the donation it violated their contractual obligations with their biggest sponsor.

“I was not around on Monday when the kit presentation was made but I have been talking to the treasurer (Webster Chikengezha) and secretary (Nyika Chifamba) regarding our obligations to BancABC,” said Mubaiwa.

“We are handling the issue and I’m confident we will find a solution without straining our relationship with BancABC and other people who might also want to help us.”

Chikengezha, who assumes the post of club vice-chairman on February 1, and Chifamba, who will revert to a committee member on the same day, attended the kit presentation ceremony.

Yesterday, Chikengezha said they never intended to use the donated kit for their matches, even though it comes distinctly in the blue home and white away colours, but for training.

“I want to clarify that these jerseys and shorts are for training and they are not our playing kit because that kit will be provided by BancABC,” said Chikengezha.

“This kit was ordered a long time ago, before we entered into our agreement with BancABC, and the guys who undertook to bring this kit did not deliver it in time in May last year as per the agreement. But the kit had already been ordered and some sponsors came in and decided to donate it to us as training kit and gave that assurance when they made a pledge during our awards presentation ceremony.

“The kit was ordered as a playing kit but it was donated to us as a training kit because of our agreement with BancABC which has to provide the playing kit.

“We are already in the process of looking at the designs for our playing kit for this season and we are doing that in consultation with our sponsors.”

Sources told The Herald yesterday that the BancABC agreement is an exclusive one that gives the bank the right to source and provide both playing and training kit and equipment for Dynamos.

While BancABC certainly have no problems with other sponsors coming on board to try and help Dynamos, the bank is not comfortable with trespassers moving into its territory without its approval given that it has to protect its branding rights.

The sources revealed that Toyota Zimbabwe’s proposal to be Dynamos partners has already been accepted because it does not have any areas of conflict with BancABC.

“Toyota Zimbabwe, as part of their proposed deal, wants to supply kit to Dynamos and they have engaged BancABC because that jersey will still carry the BancABC logo at the front of the jersey and the Subaru logo at the back.

“BancABC have been looking at that document from Toyota Zimbabwe and they have agreed that there is absolutely no conflict whatsoever in the proposed deal and that is why you are going to see Toyota coming in as one of the sponsors of Dynamos this season.

“Obviously, Dynamos are a huge brand and companies are seeing that there are huge benefits that can be derived from associating with them but whatever deals have to be done at a certain professional level that does not betray the interests of the principal sponsors.

“The good thing at the moment is that BancABC have been impressed by the professionalism with which Toyota have handled their project and the two companies will work together.”

Full text of Obama speech: State of the Union 2012