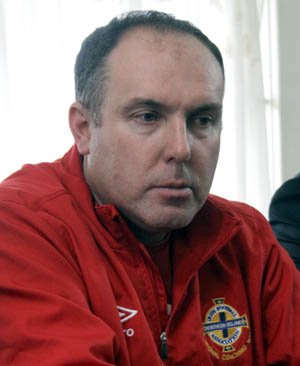 HARARE- CAPS United have settled for a European touch to try and end half-a-dozen years of waiting for league championship glory, with Northern Irishman, Sean Connor, set to be unveiled as the new head coach of the Green Machine.

The 43-year-old Connor, who has coached in Ireland and the United States and has also worked as a scout for English Premiership side Stoke City, flew into Harare yesterday and immediately held discussions with the CAPS United management.

Connor is expected to sign a three-year deal, subject to the Department of Immigration granting him a work permit, and CAPS United officials revealed yesterday they will make the necessary applications to the PSL, Zifa, Sports Commission and the Ministry of Home Affairs.

The Northern Irishman turns 44 on July 12 and yesterday said he was excited about the adventure of his first coaching job in Africa and was confident he could write a success story. “I’m ambitious and very excited to work in Zimbabwe and work at CAPS,” Connor told The Herald yesterday.

“A good friend of mine in Ireland has been speaking to me, for the past six months, about considering the possibility of coming here to coach and I have to say that I am happy to be finally here. I have come here to try and win the league, to be successful and to develop a brand of football our supporters will enjoy.

“There is no point for me to come all the way from Northern Ireland without trying to be successful and I’m not here for fun and I look at this as an opportunity for me to also develop as a coach.”

Connor said working in Zimbabwe would provide a different challenge and he wanted to experience it and try and make his model of coaching turn CAPS United into a successful football team.

“I think it’s the opportunity to work in a new football environment, to work with players and coaches in a different environment that helped me decide to come and work here,” said Connor. “It’s an up-and-coming league here and it presents me with a unique opportunity and I’m looking forward to it.”

A Leeds United fan, Connor described himself as a disciplinarian who will always put the interests of the club ahead of everything else. “I will be very strict and I have always believed in discipline because I have always worked with full-time players who respect the game and the institutions they work for,” said Connor.

“Players should know that 24/7 they are representing the football club and they should respect it and they should try and perform to the best possible level every time they get an opportunity.

“Players generally enjoy playing for me, players enjoy working under me and I like players who work hard, I like to play at a high-tempo and make the players enjoy what they will be doing.”

Connor played in the Irish League and had stints at English clubs Port Vale and Macclesfield Town but a car accident, in which he broke his chest bone, some of his ribs, punctured his lung and damaged his left leg, brought his playing career to an end.

He was a success story as manager of Sligo Rovers in the Irish League in 2005 as he guided the team into the Premier Division where the Rovers finished an impressive fifth. Bohemians came knocking on his door and he accepted the challenge.

He guided the club to a top four finish in his first season in 2007 and they lost in the final of the League of Ireland Cup to Derry City.

His contract at Bohemian was terminated on December 19, 2007, for undisclosed reasons and Connor latter won a High Court case in which he filed for compensation insisting that his dismissal had been unlawful. Bohemians paid a substantial sum in damages.

On December 8, the following year, he joined Dundalk and while his team finished fifth in the league, they were remembered for the 19 red cards they collected during the campaign.

He left the club on November 7, 2009, by mutual consent and signed a three-year deal to coach Galway United on January 10 but although results were good in the beginning, things turned for the worst last year when they suffered a League of Ireland record run of 23 straight defeats.

In the United States, he worked at USL clubs Cincinnati Riverhawks and Boston Bulldogs and, added to a stint in which he worked as a media officer for Birmingham City Football Club, he also scouted for Stoke City and Lincoln in England.

Connor said he gave Everton forward, Seamus Coleman, his breakthrough into football after signing him as a relative unknown, having seen his potential, and paying him just 200 euros a week.

“I have a good eye for developing talent and I want to work with the young players a lot and the youth system at CAPS is an area I will work on closely,” said Connor. “I have a five-year-old son and I hope to move my family here by the summer.”

CAPS United vice-president, Farai Jere, said his club was convinced they were investing in a man who could take their brand one huge step forward.

“It’s his first time in Africa but we are confident it will work out because we are ambitious, just like him, and we want to win big things and he understands where we are coming from and where we want to go,” said Jere.

“We will complete the necessary paperwork so that he can get a work permit and, once that is done, he can start working with the boys. We have also had a meeting with Lloyd Chitembwe and he has advised us that he can work at the club as the first assistant coach with Kennedy Nagoli being the second assistant coach.

“We have a young coaching team that should blend European and African coaching methods to help us succeed and we are confident, if everything goes well, that we will be a competitive side this season.”