Chief after Tsvangirai’s property over ‘marriage’ 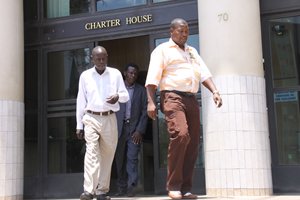 HARARE – Prime Minister Morgan Tsvangirai’s supposed marriage to Locadia Karimatsenga, has taken a new twist after a chief issued a warning to attach his residential property in Harare.

Chief Negomo, Lucious Chitsinde who in December found Tsvangirai guilty of breaking customary laws that prohibit families from performing marriage rites in the sacred month of November, says he will this week move to attach property at the premier’s Strathaven home, citing Tsvangirai’s failure to pay a fine on time.

Legal experts such as Professor Lovemore Madhuku immediately said the chief was turning the whole matter into a political drama as he enjoys no power under the law to attach Tsvangirai’s property.

‘Maybe Mugabe was right about Professor Madhuku after…

Tsvangirai claims he did not marry Locadia, insisting the money he paid was compensation after his lover claimed to be pregnant. But Negomo insisted the difference was the same since traditional rites were performed at the Karimatsenga family home in Mazowe.

Negomo claims the Karimatsengas are his subjects hence has jurisdiction over them. He fined both families two goats, two beasts, two sheep at his traditional court at Gweshe Business Centre in Chiweshe on December 10, giving them until yesterday to pay up.

Both families are yet to pay the fine, with the Karimatsenga family claiming to be waiting for Tsvangirai to offer resources to meet the fine demand, according to Negomo. “We are going to take action against them,” he told the Daily News on Sunday at the weekend.

“We shall move to Christon Bank (the Karimatsenga family home) and attach their properties or go to their village in Kanyemba to collect the cattle. This is a customary ruling and they are aware of the procedures,” said Negomo.

“We shall do the same to Tsvangirai,” he added. At the court, Locadia was represented by her family members that included uncle, Isaac and brothers Positive and Abraham. Tsvangirai snubbed the court hearing, and instead asked his lawyers to advise Negomo that the proceedings were illegal.

“The Karimatsenga family are my subjects and they accepted the court ruling by attending the court and they have told me that they are waiting for their son-in-law Tsvangirai to help in paying the fine,” said Negomo.

A man who identified himself as Daniel answered the MP’s phone and said she was busy and will phone back later. She had not done so by the time of going to press last night.

Luke Tamborinyoka, the PM’s spokesperson, has stuck to a statement released by Tsvangirai’s Office soon after the news of “marriage” broke out in November denying the marriage.

Law professor Lovemore Madhuku said Negomo had no legal right to attach any property from Tsvangirai in terms of the law.

“There is no law that allows Negomo to attach the property. Attachment is done by the messenger of court or sheriff not anyone else. If he continues with the attachment it will be theft. I know that Negomo is playing politics in this matter.  There is a legal process to be followed for him to attach anything,” said Madhuku.

Locadia is still said to be staying with Tsvangirai’s mother in Buhera’s Hamunikwa village where she is still holed after eloping there last year. The premier has beefed up security at his rural home to prevent the media from snooping on or interviewing Locadia.

Despite being a father of six, Tsvangirai became one of Zimbabwe’s most sought-after men after the death of his wife Susan in a road accident along the Harare- Masvingo Road two years ago.

Locadia, a single mother and formerly married to Harare businessman Ben Muchedzi, appeared to have scored in November but the “marriage” has been haunted by controversy since. Yesterday Tsvangirai denied that he spent Christmas with Locadia in South Africa.

Tsvangirai is denying his supposed marriage to Locadia and last year issued two different statements on the same matter in one of the boobs which his rivals say shows the confusion surrounding him at the moment.

The popular MDC leader has blamed the spy agency — Central Intelligence Organisation (CIO) — for showing its hand in the “marriage” saga which he says has been used to tarnish his image and weaken his party ahead of possible elections this year. Daily News

‘Maybe Mugabe was right about Professor Madhuku after all’ –…