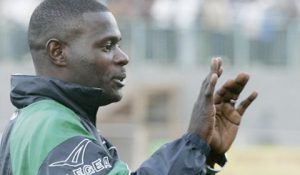 HARARE- CAPS United head coach Lloyd Chitembwe might not return to the local Premiership soccer giants this forthcoming season after he indicated yesterday that he was no longer interested in coaching football in the top-flight.

Chitembwe had an initial arrangement to see out the remainder of the 2011 season and the coach now needs to put pen to paper for a fresh and substantive deal. However, the CAPS United coach told The Herald yesterday that he was not willing to extend his contract at the club as he will be taking a football sabbatical this season.

He said he doesn’t have the zeal to coach any more and is not motivated to go into the trenches when the Castle Lager Premier Soccer League kicks-off in March.

“Honestly speaking, I don’t have a clue what is happening at the club. I am yet to sign a contract. I have taken a position that this year I will not be involved in football . . . It is just personal. I just don’t have the drive (to coach any more).

“For now, the only football I would be involved with is playing social soccer with other former players. Football is always part of my life but at the end of the day football is not everything. There is more to life,” said Chitembwe.

However, the CAPS United management was singing a different tune yesterday with the club’s chief executive Maxwell Mironga saying they have agreed in principle with Chitembwe to coach the team this season.

“We discussed with the coach and agreed. The office was closed for holidays so we will meet this week and put pen to paper as well as getting his pre-season preparation schedule in place,” said Mironga.

Mironga also said that as far as the club was concerned, the former Warriors midfielder would be in charge of the Green Machine during the 2012 season. Chitembwe has had an on-and-off relationship with CAPS United, a club he rejoined last August following the sacking of Maxwell Takaendesa Jongwe.

Sources close to the goings on at CAPS United said the club’s bosses have addressed the major sticking points which were raised by the coach including his relationship with the hard-to-please Makepekepe fans.

The club’s vice-president Farai Jere is reported to have met with the CAPS United supporters and both parties agreed that they would let the mentor conduct his business without any interference from the team’s vocal and sometimes abusive fans.

Away from the confusion surrounding Chitembwe’s availability for next season, Mironga said the club was looking forward to the new season and expect to perform well after a disappointing outing last year where they managed to finish in the top eight despite beginning the season as strong title contenders.

Makepekepe were also busy on the transfer market where they acquired the signatures of the former TP Mazembe duo of Chris Semakweri and Darryl Nyandoro. They also beat arch-rivals Dynamos in acquiring the signature of skilful winger Semakweri.

CAPS United have also signed Conrad Whitby who was at Premiership rivals Motor Action last season as well as defender Blessing Zabula from Eastern Region Division One side Triangle and defender Luckson Kaisa from Black Mambas.

Mironga said they will not be buying more players and are only left with concluding one more deal with Motor Action forward Tawanda Nyamandwe.

“We are yet to finalise with his club but Tawanda should be joining us. Arnold Chivheya is returning to the club as he was on loan at relegated Kiglon. We have managed to retain the squad we had last year and will be off-loading Last Chibwiro and Ronald Sengu,” said Mironga.

CAPS United still have the likes of striker Evans Gwekwerere, Charles Chiutsa, David Sengu and David Rediyoni in their fold.

Interview: Why General Nyikayaramba must go