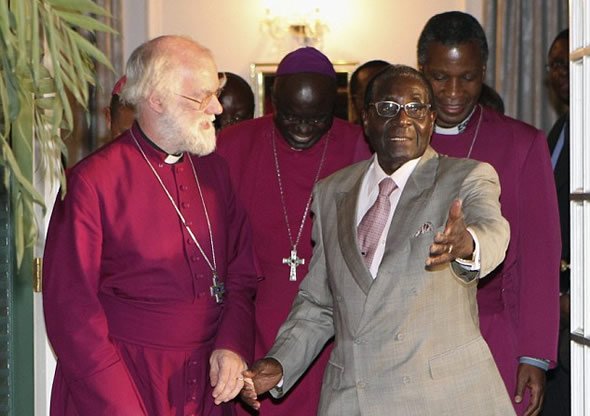 HARARE, (AP) — Zimbabwean police stopped a retreat of 80 clergy over claims that their prayer gathering was not given police clearance under sweeping security laws, the country’s mainstream Anglican church said Tuesday.

Zimbabwe’s Anglican church has been split by a breakaway group led by a bishop close to the president, who has seized church properties without police intervention. The bishop has been excommunicated by world Anglicans.

The mainstream Diocese of Harare said in a statement that police ordered them to disperse Monday from the Peterhouse private school but they refused, denying any wrongdoing and insisting police remove them by force.

UK’s Rwanda asylum plan the ‘opposite of nature…

The mainstream Diocese of Harare said in a statement that police loyal to Bishop Nolbert Kunonga returned Tuesday to the school 50 miles (80 kilometers) east of the capital and were in a standoff, demanding the clerics, including two bishops, leave the school grounds.

“We deplore this action and call upon higher authorities to intervene. So much for freedom of religion,” the head of the mainstream Anglicans, Bishop Chad Gandiya, said in the statement.

The boarding school is not linked to the church but allows Christian and other groups to use its facilities during vacations.

The police action marked the beginning of “another year of persecution at the hands of a hostile police force” and was a clear indication of the allegiance of police to Kunonga, the statement said.

The 80 clerics headed by Gandiya and Bishop Julius Makoni, the bishop of the eastern city of Mutare, represented the church in Harare and eastern Zimbabwe for their annual New Year’s retreat.

Kunonga, the breakaway bishop, claims to lead Zimbabwe’s Anglicans and has already refused to hand back the Harare Cathedral, offices, buildings, church bank accounts and vehicles he seized with the protection of police loyal to President Robert Mugabe.

In 2007, Kunonga was excommunicated by the main Anglican Province of Central Africa and the worldwide head of the church after he was accused of inciting violence in sermons supporting Mugabe’s party.

The schism in the Zimbabwe’s Anglican community has left many mainstream Anglicans without places of worship and they’ve experienced intimidation and threats of violence.

On a visit to Zimbabwe in October, the Archbishop of Canterbury, Rowan Williams, met with Mugabe and handed over a dossier detailing incidents of intimidation and violence that included death threats to Anglican bishops and police raids on churches and mission schools to drive out worshippers, clerics and staff loyal to Gandiya.

Williams told reporters after meeting with Mugabe that the president told him he was unfamiliar with the scale of intimidation the mainstream Anglicans in Zimbabwe were facing.

Kunonga, who has denied the allegations against him, won a Supreme Court ruling in August allowing him to retain control of Anglican properties until an appeal by the mainstream Anglican church is resolved.

That ruling was made by Chief Justice Godfrey Chidyausiku, who like Kunonga is an open supporter of Mugabe’s party.

Kunonga insists he broke away from the mainstream Anglicans after the church in Britain recognized gay marriage and the rights of same sex partners. Mugabe is a bitter critic of homosexuality. The Associated Press

Mwonzora responds to critique of constitution

UK’s Rwanda asylum plan the ‘opposite of nature of God’ –…