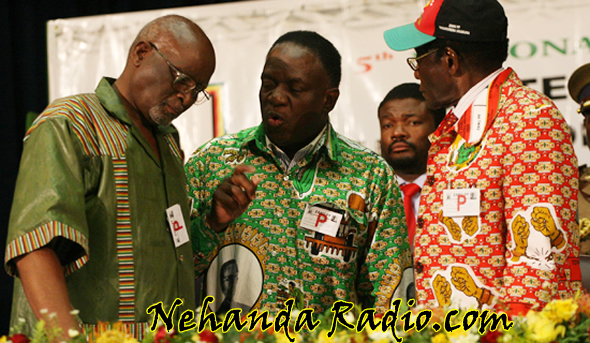 The just-ended Zanu PF conference confirmed beyond doubt that Mugabe has succeeded in imposing himself as the party candidate for the next elections, whenever they will be held.

The conference resolutions also show that Mugabe and a small clique of securocrats and civilian hardliners have prevailed in pushing through their selfish interests at the expense of national interest by cajoling the party into endorsing an election that no sane Zimbabwean wants.

The Bulawayo conference was not a serious platform for the party to deliberate on policies and issues affecting it, but a charade by Mugabe to legitimise his selfish election agenda.

Mugabe was anxious to get endorsed as the party’s candidate because he is aware of how unpopular he has become in the party. A running thread in all the WikiLeaks cables involving Zanu PF politicians is that they all view Mugabe as a liability to the party and would rather see his back soon.

The elective Mutare congress had already endorsed Mugabe as First Secretary of the party, effectively endorsing him as the party’s candidate at any election. But because of his paranoid delusions Mugabe thought it necessary to get another affirmation from the Bulawayo conference. This explains his insistence in the build up to the conference that it was almost like a congress.

That Mugabe’s candidature in the next election would be confirmed by the conference was in no doubt. By the time the 6 000-odd delegates gathered in Bulawayo all the provinces had grovelled at Mugabe’s feet, falling over each other to be the first to endorse him as their candidate.

I argued in this column that Zanu PF had once again squandered an opportunity for serious self-introspection and leadership renewal by endorsing a man who will be 88 years old next year as their candidate. What the party needs to urgently do is retire Mugabe and replace him by a younger and more energetic leader before the next election.

Frankly, I do not see how Mugabe will manage a gruelling electoral campaign given that his health is fast deteriorating due to old age. My suspicion is that the cabal of civilian hardliners and securocrats has assured Mugabe that they will deliver “victory” to him the same way they did in 2008. What this means is that they hope to craft a highly militarised electoral campaign that is akin to the 2008 presidential election run-off.

Mugabe and his strategists hope that they can deploy war veterans and other auxiliary outfits including the youth militia into communities to not necessarily beat up opponents, but to demonstrate that they are still there and they can unleash violence.

Their calculation is that communities are still traumatised by the 2008 violence and that with minimal violence and intimidation Mugabe can claim a legitimate election victory.

The rabid rumblings by war veterans’ leader Jabulani Sibanda about some “dogs” that cannot protect their territory are a clarion call to his followers to start mobilising within communities. The architecture of violence, which has just been lying dormant, will become more visible at the beginning of next year.

Ominously one of the resolutions from the conference specifically talks about targeting non-governmental organisations, which party secretary for legal affairs Emmerson Mnangagwa accused of “meddling in the internal affairs of the country”.

The strategy is to target civil society organisations doing human rights defence work. They have been a constant irritation for Mugabe and his henchmen because of their capacity to expose rights abuses both internally and externally.

Mugabe views them as part of the regime change agenda and he detests them the same way he detests the MDC. In the run up to the 2008 presidential election run-off many rights groups were forced to close shop as they had become targets of repression.

Only last week The Patriot newspaper, a shadowy Zanu PF-aligned publication, ran a series of stories accusing rights NGOs of receiving US funding. What the paper did not bother to tell its readers is that the same US government is also providing millions of dollars in humanitarian assistance to the people of Zimbabwe.

Such articles are being carefully worded to portray rights NGOs as agents of Western interests. Ironically it is the same US government that top Zanu PF officials have been running to and holding secret meetings to discuss confidential internal party affairs.

Mugabe’s plan is to also target the private media as he views it as a critical bastion of opposition voices. In the past journalists have been arrested and detained with impunity for doing their job. Party heavyweight Mnangagwa told the Bulawayo conference that the party would craft a “response mechanism” to the media including users of social platforms.

Zanu PF strategists are fearful of the power of both traditional and new media in exposing electoral fraud and in mobilising citizens in the event of a sham election. Only recently another Zanu PF functionary Herbert Murerwa was blaming Facebook for the revolutions in the Arab North.

Will Mugabe succeed with his election plan?  He faces a Herculean task. The biggest hurdle to his game plan is Sadc. Despite the hullabaloo about the Government of National Unity (GNU) not working, Mugabe knows that he is entangled in it and he cannot afford to unilaterally pull out of it.

That explains why in the past he has unsuccessfully attempted to cow the MDC into pulling out of it by arbitrarily arresting its senior officials, deliberately frustrating Prime Minister Morgan Tsvangirai and being rabidly recalcitrant.

He hoped that the MDC would pull out of government and be to blame for the collapse of the GNU. The MDC has seen through Mugabe’s Machiavellian schemes and has stuck it out in the GNU.

Sadc will not allow any of the parties to leave the GNU and will not agree to a hurried election. They see it as the only hope for a permanent solution to the crisis. Jacob Zuma will stick to his guns insisting that the parties adhere to the roadmap that outlines a raft of reforms that have to be undertaken before the next election.

The days of Mugabe bullying Sadc are over. The regional body is determined to find a lasting solution to the Zimbabwean crisis. They see it as a blight on the regional bloc’s quest for political stability and sustainable economic growth.

Moreover, events in the Arab North have spurred Sadc to act decisively in resolving regional crises in order to pre-empt foreign intervention. Sadc leaders are tired of being viewed as an ineffectual group that is beholden to Mugabe.

The Livingstone Troika meeting and the Sandton summit attest to this. They have already warned Mugabe that he risks being swept away by an Arab-style revolution if he continues to suppress the will of Zimbabwean citizens.

Given these factors getting an election past Sadc will be a hard sell for Mugabe. He would not countenance acting unilaterally. Never mind the bravado and fist waving, Mugabe knows that he cannot afford to thumb his nose at Sadc like that. Being the shrewd political tactician that he is, he understands the implications of alienating Sadc.

He has not forgotten the fact that it was Sadc that threw him a lifeline by forcing the MDC to go into a power sharing government with him when he had clearly lost legitimacy. He also understands that South Africa will not brook a flawed electoral process.

Here is how I think Mugabe and his strategists will move. They will seize the election momentum from the conference and try to plunge the whole country into an election psyche.

Their eyes will be on Sadc and if the regional bloc bats an eyelid they will move with haste to call an election. For the reasons that I have mentioned above, my sense is that Sadc will not bat an eyelid and this will force Mugabe to adhere to the terms of the roadmap to elections including the completion of the new constitution and the reform of state institutions.

Realistically this means he can only have an election in 2013. Whether he has the political stamina and physical health to last until then is a debate for another day.

Charles Mangongera is a political analyst based in Harare. This article was first published in the Journal of Zimbabwean Politics.