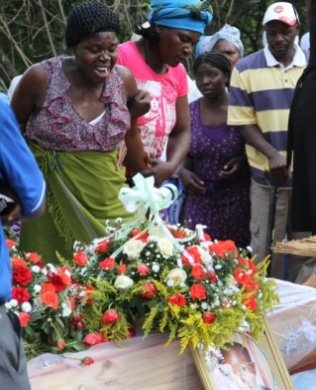 HARARE – Fresh details have emerged that the crew of the speed boat that capsized and killed 11 children on Lake Chivero Dam on Christmas Day, swam to safety and left the children to die.

It also emerges that the accident was caused by a combination of negligence, greediness, drunkenness and human error. Survivors also told the Daily News about the strange behaviour of the skipper, who while in the middle of the lake, suggested to the petrified children that the boat might capsize.

The Daily News had been told by witnesses who encountered the crew before the disaster that they were clearly drunk and were after money even if it meant risking the lives of people. The newspaper was also told of how the crew, all swam to safety leaving the hapless children at the mercy of the harsh waters.

Coronavirus: Queen tells UK ‘we will succeed’ in…

Iran plane crash: Why this could be a watershed moment

Speakers at a motive mass funeral held for Tanaka Ruzvidzo, 11, Tatenda Ruzvidzo, 5, Sharon Ruzvidzo, 11, and Angeline Kasitu, 16, in Mungate village in Domboshava yesterday said the tragedy could have been avoided if necessary precautions had been taken by the National Parks and Wildlife department, police and the boat owners.

The Daily News crew arrived at the cemetery in Domboshawa and witnessed the body viewing process which touched the hearts of everyone present. There was a lot of wailing when the coffins were opened by the pall bearers. Friends and relatives could hardly contain the pain at the sight of four coffins.

Heartbroken mothers had to be assisted by relatives to view the bodies and bid farewell to their deceased children. Esther Muronzi who survived the ordeal said the boat was so overloaded that it had to be pushed into the water because the engine could not sustain the weight of the load.

According to the 16 year old, who is a student at Queen Elizabeth High School, some people had initially suggested that they leave some people behind but the captain insisted it was not necessary.

“When we got to the middle of the lake, the captain said; “does anyone want to die?” We were all shocked by the question and we were scared. He then asked if anyone could swim and I raised my hand,” Muronzi said. The traumatised teenager said the crew started laughing.

“He then told us that the dam was over 30 meters deep. Just before the accident, the driver just made a U-turn and the said: “If you do not know how to swim then you can kiss goodbye to your lives because the boat is sinking. I am saving my life.”

“After the boat capsized people were trying to swim but we could not get up because the boat would block our heads, we were all stuck under the boat,” she said.

“When the driver and his colleague jumped into the water, they swam to a boat which was nearby and returned to Fish Eagle where they had picked us up. They did not attempt to rescue anyone,” the traumatised teenager said.

Muronzi who still cannot comprehend how she managed to escape the ordeal said she tried to save her sister Sharon but failed. She however managed to save a two year old child who held onto her hair extensions for dear life. Muronzi said she somehow managed to swim and was eventually rescued by a boat.

A distraught relative Melody Chirara could not contain her disdain at the manner in which the rescue operation was conducted.

“There were no life jackets in the boat neither were there in lifeguards on stand-by and yet the boat was still allowed to go onto the water with so many people considering that Lake Chivero is such a big dam,” Chirara said.

The village headman identified only as Murape said the death of the children was a painful one which members of the community would never forget.“Uku ndiko kunonzi kuparara kwemusha,” (This is like destroying the whole village) Murape said.

Traumatised father of seven year old Rasim Jason, Napoleon said he would accept the death of his son.

“It is God who gave us these children and I just thank him for the seven years that I had with Rasim. I am not blaming anyone for his death because it will mean that I have not accepted his death and this goes against my religion as a Moslem,” Jason said.

Village elder Gwasira called on the government to put in place stiff penalties against illegal safari and boat operators.

“The government should surely take action on this matter because how can an unregistered boat carry so many people. We are also told that the driver in question was not even qualified to drive the boat,” an irate Gwasira said.

Meanwhile it’s also being reported that police have arrested the boat’s owner Latif Ameer, 53, along with captain Fadil Ramon Weale, 27, and mechanic Enock Zulu, 36, over the accident in which the 11 children drowned.

Coronavirus: Queen tells UK ‘we will succeed’ in fight

Iran plane crash: Why this could be a watershed moment

Elias Mudzuri: Stakeholders must work together to avert a time bomb in Harare