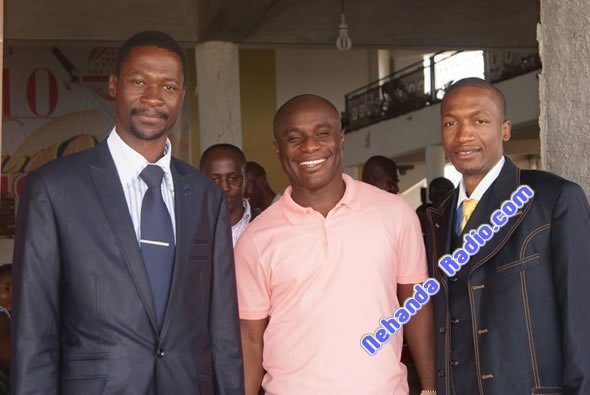 HARARE- Popular evangelist Prophet Emmanuel Makandiwa sprang a surprise when he splashed newly-weds Michael Mahendere and Vimbai Nyatsambo with a Mercedes-Benz E320 during the couple’s wedding at Paradise Gardens at the weekend.

The ceremony witnessed Michael, who is a member of the famous Mahendere Brothers gospel group, tying the knot with his sweetheart Vimbai.

Michael (28) – who is the fourth son in the line of the Mahendere siblings Akim, Amos and Misheck, who make up the popular gospel group – was all smiles as he received the car keys from Tawanda Makandiwa, who represented Prophet Makandiwa at the wedding.

An ecstatic Vimbai burst into tears of joy as the two lovebirds unlocked the doors of the trendy car and got a feel of it before the cheering crowd.

“We are humbled by this gesture. It shows how God’s hand is working in the United Family International Church and the position that the prophet gives to the Mahendere family,” said Amos.

Amos Mahendere, Joyce Simeti and Gospel Power entertained guests at the ceremony while Michael led a certain group in singing the popular song “Ruva Rangu” in Chinese, much to the delight of the crowd.

Michael’s father Peter (69) and his wife Diana (55) also showed all and sundry that music indeed runs in the Mahendere family when they did a duet. “I am happy that Michael has gone through the proper marriage channel and this shows that he is walking in God’s ways,” Mai Mahendere said.

An ecstatic Michael said he was happy to tie the knot with his flame. “It’s important to get married and that the public will now know that I am in courtship. I encourage others to emulate the gesture,” he said.

“She is a very kind and ambitious person and I loved her for that. We are birds of the same feather since she is also into music,” Michael, who started singing at the of seven years, said.

He plays drums and keyboards as well as vocals and has been part of the family group contributing to their success. The group has many albums to their name apart from their memorable stage performances. The wedding was strictly by invitation.