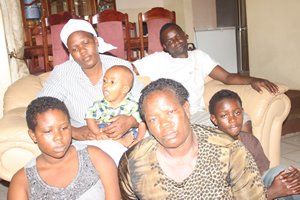 HARARE- As most families were drinking and partying celebrating Christmas, the mother of Given Flint Matapure says she has a big hole in her heart. Given went missing at the Harare Exhibition Park on August 22 this year.

Mrs Wengesai Dick Matapure said Christmas without her son Given was hollow. “Christmas without my son was empty, not only for me, but for the rest of the family. We love him very much. We miss him and we just want him back home,” said Mrs Matapure.

“I have a hole in my heart that will not heal until my son comes back. As a family on such a special day where we celebrate the birth of Jesus Christ, we eat and drink and play loud music, but this year it was different. We are enduring the pain of losing a dearly beloved member of our family,” she said.

Mrs Matapure said even her other children – Gift (eight-months), Gody (12) and Grace (16) – were failing to come to terms with the mysterious disappearance of Given.

“My other son Gody refused to have new Christmas clothes saying how could he have new clothes when Given was not there? So his disappearance has affected everyone,” she said.

Given’s father Mr Onward Matapure said the family was continuing with prayers and hoping that their son will return one day. “We will never give up. We will keep searching until we find him,” Mr Matapure said.

He said although they positively identified the clothes that were found where skeletal remains were recovered near the showgrounds, they were still waiting for the police to give them results of the DNA tests on the skeletal remains.

Police are waiting for pathologists to carry out the identification process. The Ministry of Health and Child Welfare is reportedly facing a shortage of pathologists. Given’s sister Grace also said she was living in fear as she was always thinking that someone was following them or wanted to hurt her family.

“I can’t even go outside anymore as I am always afraid for my life. I feel as if someone who is close to our family is after us and wants to do something bad to us. I really miss my brother and hope he will be returned to us,” Grace prays.

Unlike other homes where loud music was being played and food being served in the festive spirit, at the Matapure’s there was a sombre atmosphere which resembled a funeral. Their television set and radio were switched off.

Samuel left home while going to a social soccer match wearing a blue shirt and blue short with red piping on both sides while Blessing – a pupil at Kuwadzana High – was last seen on November 14 around 5pm wearing a grey short and a navy blue T-shirt.

Government has expressed concern over the increasing number of children who have mysteriously disappeared over the past few months and called for stiffer sentences for offenders.