Kaseloka bullish about his chances at Dynamos 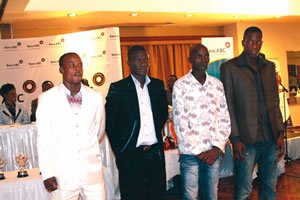 HARARE- Zambian midfielder Arthur Kaseloka is bullish about his chances of making a big impression at the Glamour Boys but wants to let his performance on the field do all the talking.

Kaseloka joined Dynamos this week together with countryman Derrick Kabwe, from Zesco United, to help the Glamour Boys in their quest for Champions League glory.

DeMbare fans still have fond memories of their club’s partnership with Zambian players as both Francis Kasanda and Sandras Kumwenda doing well during their stint at the club.

Although this is the first time Kaseloka is playing outside his native country, the midfielder said he was ready for the new challenge and was hopeful of making his mark.

Kaseloka conceded that he will have to work hard to conquer the challenges he will face as DeMbare wage battle on two fronts in the Champions League and the domestic Premiership.

Dynamos have just completed a successful season in which they won a league and cup double. The Glamour Boys resolved to cross the borders in search of fresh talent to boost their squad in the face of a demanding season ahead of them.

The club’s secretary-general, Nyika Chifamba, spoke glowingly of their new players at the unveiling ceremony but Kaseloka, who is virtually unknown to the Blue Army, said he was ready for the challenge.

“I know Dynamos have a reputation and I am happy to play for one of the big clubs in Zimbabwe,” said Kaseloka. “A lot will be expected from the new players but I am a kind of person who doesn’t want to talk too much.

“I cannot make any promises at the moment because I believe action speaks louder than words.  What I can only say is that I will put in everything into my game to make sure that I make a meaningful contribution to the team.”

His former club, Zesco United, were the 2010 winners of the Zambian Premiership and they played in the Champions League early this year. But they fell by the wayside in the second round when they were edged 1-0 by Egyptian giants Al Ahly.

They then dropped to the second tier Confederation Cup but their campaign came to an end when they lost the play-off to Moroccan side Maghreb de Fes, who went all the way and won the tournament.

“I have played in three continental campaigns. We played in the Champions League this year and we couldn’t progress to the knockout stage and fell into the Confederation Cup,” said Kaseloka.

“It’s not new to me to play in Africa but I have to give my best especially when playing teams from North Africa.”

The Zambian pair was part of the six players unveiled by Dynamos, who include Young Warriors goalkeeper George Chigova, Ocean Mushure, Tinei Chitora and Takesure Chinyama, who has since been drafted onto the provisional squad.

Kaseloka is an attacking linkman and is expected to provide options in the engine room following the omission of a number of midfielders like Nicholas Alifandika, Nathan Ziwini, veteran Desmond Maringwa and Timire Mamvura.

DeMbare registered 25 players and Maringwa has reportedly been left out because of his injury, with the technical team not certain about his chances of recovering to play in the first two rounds of the Champions League.

Interestingly, Maringwa told The Herald last week that he was not retiring from the game because he felt he still had some unfinished business in the Champions League.

Maringwa was hurt by the way DeMbare were apparently robbed of a place in the second round this year when an Egyptian referee turned their second leg tie against MC Alger into a horror show for the Glamour Boys.

“I’m not going anywhere. I believe I still have a lot to give in terms of experience, especially in the Champions League and I was hurt by our performance this season,” said Maringwa.

“I know we compensated for that by winning the league title but I still believe we can win the Champions League. We had a disastrous Champions League campaign due to inexperience but I’m glad they have grown mentally, they now understand what it means to play for Dynamos.”

Maringwa said the that he was looking forward to the new season and not even thinking about hanging up his boots.

“When you play for Dynamos, every season is great and every time that you are on the field you feel good.

“We have great coaches in Pasuwa and Tonde (Ndiraya), they struck a balance between the senior and young players and I think that was key to our success. The previous coaches contributed a lot too, it’s unfortunate they couldn’t carry on with the team.”

DeMbare lost midfielder Archford Gutu, who is moving to Sweden, and yesterday was hosted by the Swedish Ambassador at a reception in the capital.