Grace Mugabe ‘hurts her back in the gym’ 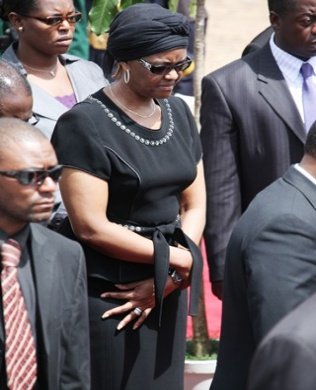 HARARE- First Lady Grace Mugabe on Friday moved to dispel reports that she is ill claiming she only hurt her back while exercising in the gym. She spoke while officially opening the Health, Fitness, Beauty and Fashion Expo in Harare.

“It was exaggerated by the reports that I am ill and about to die. I only hurt my back in the gym and I am very fit.” In April this year Nehanda Radio.com reported how Grace Mugabe was rushed to Singapore after she slipped and fell in the bathroom at their Borrowdale mansion, suffering a dislocated hip.

Sources close to the family said Grace had not recovered from the injury and ‘could be seriously ill.’ Even Robert Mugabe’s motor-mouth spokesman George Charamba hinted that the First Lady is battling illness.

Charamba claimed Grace had not fully recovered from a complication she suffered while giving birth to her last-born son Chatunga 14 years ago adding he was not aware of the hip dislocation. “I would not be privy to that kind of information,” Charamba told a local weekly newspaper.

“I have not heard about it. However what I know is that the First Lady, after the birth of Chatunga, developed some slight discomfort with her back but that was a long time ago.”

Charamba also confirmed his boss had gone to Singapore but said it was not an “official visit.” But the fact that the presidential spokesman was not briefed about the trip hinted to the fact that it was an emergency. Grace Mugabe had not been seen in public in a long time, further fuelling speculation about her health.

Robert Mugabe meanwhile is battling prostate cancer according US diplomatic cables leaked by the WikiLeaks website. His battle with the disease was revealed to James McGee, the former US Ambassador to Harare, by central bank governor Gideon Gono, during a private meeting in June 2008.

According to Gono Mugabe was told by doctors in 2008 that the disease could kill him by 2013. Gono is one of the 87-year-old Mugabe’s closest friends but was last year accused of having an affair with the president’s wife, Grace, who is 41 years his junior – something both parties denied.

According to WikiLeaks, Gono revealed Grace’s anxiety to the former US ambassador Christopher Dell during a private meeting held in his spacious 22nd floor office at the Reserve Bank HQ in February 2006.

“The Governor confided that Mugabe appeared to be deteriorating mentally and losing his capacity to balance factional interests,” Dell wrote in his report following the meeting.

“He (Gono) said that Mugabe’s wife had confided to him that the President was ‘out of it’ about 75 percent of the time and she wanted him to step down.” Nehanda Radio.com

Passion Java, Chatunga Mugabe ‘beef’ boils over… how did we get here?