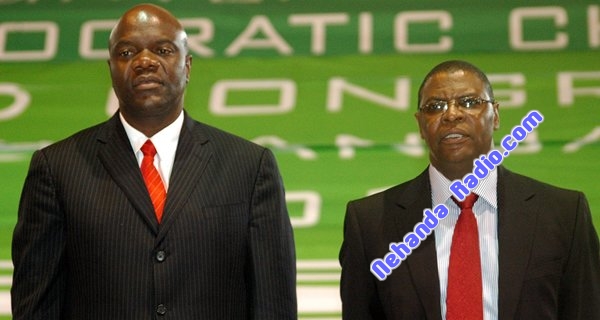 BULAWAYO- Deputy Prime Minister Professor Arthur Mutambara on Thursday lost the case in which he was challenging Professor Welshman Ncube for the post of MDC president. The judgment, delivered at the Bulawayo High Court by Justice Nicholas Mathonsi on behalf of Justice Lawrence Kamocha, means that Prof Mutambara is no longer president of the smaller MDC formation.

After being granted a provisional order on February 16, with an interim relief pending the determination of the matter in the High Court, the party amended its application seeking further interdiction for Prof Mutambara not to act as both party president and principal pending finalisation of the case. Prof Mutambara was also interdicted from purporting to be president of the MDC, exercising any function as president of the party and interfering with party structures.

On Thursday DPM Mutambara said the judgment will not affect his duties as Deputy Prime Minister and a principal in the inclusive Government. He said his lawyers will file an appeal at the Supreme Court on Friday. “I do not agree with the judgment and I have instructed my lawyers to file an appeal. I will remain a principal and the Deputy Prime Minister, so this judgment will not affect me in that way. It affects my position as the party president and that is what I will challenge,” he said.

MDC, through its secretary-general Mrs Priscilla Misihairabwi-Mushonga, had sought ratification of the interim relief. The party further sought that Prof Mutambara be interdicted from attending any meeting of whatever description of the principals in the inclusive Government or any regional or international body as a principal. It further sought that he be interdicted from exercising any function or power vested in the president of the MDC or principal in the inclusive Government and that he be declared as not the president of MDC and pay the costs of the suit.

Said Justice Kamocha: “Until and unless that happens, the applicants have a clear right to leadership elected at the congress and for that leadership alone to run the affairs of the party.” He said Prof Mutambara’s conduct was causing irreparable harm to the party he purports to still lead when he freely and voluntarily relinquished the presidency at the congress and persists to want to act as the principal of the party.

Justice Kamocha said the balance of convenience clearly favoured the applicants. “In light of the foregoing findings, this court holds the view that the applicants are entitled to the final order they seek in terms of the amended draft.” Justice Kamocha said Prof Mutambara had been untruthful and perjured himself when he made statements that the January congress was actually not the party’s third congress.

Prof Mutambara’s conduct, the judge said, was difficult to follow and understand in light of the fact that he had attended the congress and addressed it. By initially accepting the outcome of the congress and the leadership elected thereat, and later changing his stance after four weeks and beginning to allege that there was no lawful party congress at which new leadership could have been elected, Justice Kamocha said Prof Mutambara acted outside the party’s constitution.

“The respondent ceased to be principal when he freely and voluntarily relinquished the presidency of the party on 8 January 2011.” Justice Kamocha said Prof Mutambara was not being truthful in claiming that he had never officially indicated that he was not contesting the MDC presidency, claiming there were no opportunities for him to contest.

The judge said not only did Prof Mutambara withdraw from the presidential contest by advising the various provincial chairpersons of his withdrawal on 7 January, but also advised the then national working committee and later the national council of his official and formal withdrawal. Justice Kamocha said the correct position is that the congress was legitimate and Prof Mutambara withdrew from the contest.

Justice Kamocha said the gathering of 4 428 party delegates on 8 and 9 January was the third congress of the MDC. He said Prof Mutambara knew and believed that he was addressing the said delegates at the congress and freely and voluntarily withdrew from the contest where a new leadership was elected. Justice Kamocha said Prof Mutambara took active participation at the congress and fully accepted the outcome.

He said he perjured himself when he averred that what he had repeatedly termed the party’s congress in his address to delegates was in fact an ordinary party meeting and so the outcome of the congress remains valid until declared otherwise by a court of law. When the party’s national standing committee met on 23 January, it resolved to reshuffle its cabinet members including the position of Deputy Prime Minister, meaning Prof Mutambara was to become Minister of Regional Integration and International Co-operation.

However, Prof Mutambara requested permission to remain DPM until June to enable him to complete the programmes he was pursuing. But on 7 February Prof Mutambara then issued a statement saying he was not prepared to be reassigned and issued another one the following day saying he had dismissed the new party president Prof Ncube. The Herald

Tomana not fooling anyone over WikiLeaks