Obert Mpofu ‘the most corrupt Minister’ 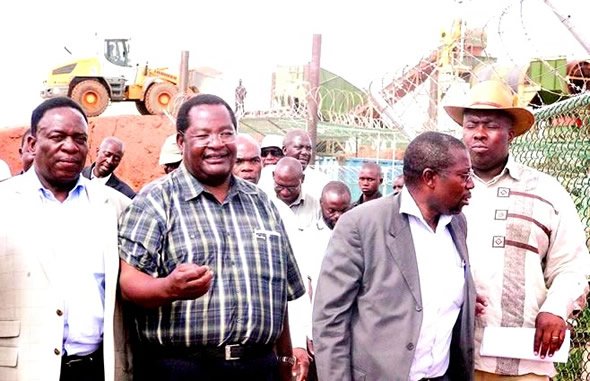 When we choose to enter public life we lose a number of important things – our right to some forms of privacy, the right to say just what we want; we cannot speak anymore as a private citizen and our public has the right to hold us accountable.

The facts are not in dispute:

‘Look across the world and very few national leaders…

Eddie Cross: There are solutions to the power crisis we face…

After years of post-colonial failure, Africa is rapidly…

Eddie Cross: ‘We need to rebuild agriculture from the…

‘We owe each Zimbo a corrupt-free policy and delivery…

•        They were discovered by De Beers Diamond Mining Company – the largest gemstone company in the world who allowed their rights to lapse;

•        They were then registered legally by African Consolidated Resources whose legal rights have simply been swept aside by the Ministry of Mines;

•        Since 2006 when commercial and informal exploitation began, several billion dollars worth of gemstones have been produced with production and sales now running at over $4 billion a year; and

•        The fields have been the subject of serious human and legal rights abuse, there has been no accountability or transparency in the States activities on site or those of their “partners” who represent shady interests and whose links to prominent Zanu PF and Military figures is shrouded in secrecy.

The Minister responsible, Mr. Obert Mpofu has reacted in an interesting way. At a recent Parliamentary budget workshop he walked up to me with a broad smile (we know each other well) and said he had nothing to hide and would be announcing major new initiatives on Marange.

In his subsequent speech he stated that diamond sales “could” reach $2 billion in 2012 and said he was in discussion with the Minister of Finance about how to boost the revenues to the State. He attacked De Beers and made some outrageous allegations about their exploration activities on the site alleging that they had illegally been exporting diamonds from the field for years up to 2006.

He then went on to say that my proposal to nationalize the Marange diamond fields was nonsense; if we were to do that “Why not nationalize everything else – the platinum mines, Marowa Diamond Mine (Rio Tinto of London) and everything else”. He has subsequently repeated this mantra on several occasions.

Last week he went further when he attacked my position saying that nationalisation never worked, Parastatals were universally a mess and if the Marange Fields were nationalized they would not work. He also claimed that the resource was under the control of the State in that the Zimbabwe Mining Development Corporation was in control.

He then said that I had been the Chief Executive of the Cold Storage Commission and under my leadership the CSC had collapsed and look where it is today (it is virtually derelict and non functional).

Does the Minister think that because he is a Minister in Government that he cannot be held accountable for what he says and does? He must not take us for granted or think that we are stupid and ignorant about what is taking place?

His statements are so misleading and incorrect that he cannot be allowed to get away with them – he must be held accountable for what he says. Let’s deal with some of these statements one by one:

Nationalisation of the Marange Fields is official Government Policy. It was discussed last year in Cabinet and again recently and Cabinet resolved to do just that to get full control of the diamond fields for the national benefit. The reason was quite simple – the situation at Marange is neither transparent nor accountable and completely out of control.

The resource is unique – all the people mining there have had to do is dig soil and put it through a separator and diamonds in massive quantities are produced. The proposal was debated in Parliament on the 27th of October and was passed by a significant majority. Mpofu has no right to challenge Cabinet or Parliament; he is the officer of Government who is in fact responsible for implementing the decisions of these superior bodies of the State.

His allegations about the activities of De Beers during their exploration of the Marange fields also have no basis in fact. They sent samples of ore to South Africa on a regular basis as is standard practice in exploration activity – these were always properly documented and managed. The Ministers allegations about De Beers, in my view, are actionable and it is a pity that he will not be taken to Court by the Company.

Then there is his attack on my record at the Cold Storage Commission. I worked in the CSC in one capacity or another for over 20 years, ending up as CEO from 1983 to 1987. During this time the CSC became the largest meat marketing organisation in Africa, handling up to 150 000 tonnes of beef and its associated bi-products a year. In 1984 we handled a record kill of over 700 000 head and put some 250 000 head on the Ranches to save them from death in the severe drought of that year.

I was responsible for negotiating our entry to the markets of the EU after Independence and building the new works at Bulawayo and Masvingo. I converted the organisation to wet blue processing of hides and skins and during my stay at the CSC we made a massive contribution to the industry, establishing a marketing network in tribal areas that is still operational and handles some 150 000 head of cattle a year.

During my tenure the CSC was controlled and managed by the farming industry. Since then both have been destroyed by the dead hand of Zanu PF – everything they touch dies. Mpofu, as a Minister from Zanu PF and of the Government in Charge during the collapse of the Zimbabwe economy up to 2008, is directly responsible and accountable for this situation. The many fine dedicated men and women and the workers who made the CSC such a fantastic organisation, deserve better.

Then finally, does Obert Mpofu think that his personal accumulation of wealth, assets and the creation of a massive business empire in Zimbabwe is going unnoticed? This is an African State, there are no secrets.

We know his salary as a Minister – there is simply no way that he could possibly pay for this massive accumulation of wealth from anything other than corrupt activity linked to his position in Government. He is well known as the most corrupt Minister in Government and that is no secret.

But it is his role in the Marange diamond fields that he exceeds all the boundaries of acceptable behavior as a Minister of Government. We, all of us in public positions of trust, are accountable to the people for what we do with our position and authority. What Obert Mpofu is doing is violating both and in consequence is denying the general population of Zimbabwe what is their right – a better quality of life.

If the Minister was managing the resources under his control properly and in the national interest then he single handedly could transform the social and economic situation in Zimbabwe. When I left the CSC in 1987 I did not own a car, I had a bond on my home and my children were all in State schools because we could not afford private education.

My pension is $64 a month. Every woman who dies in childbirth in Zimbabwe, every child turned away from school because they cannot pay the fees, is a victim of Obert Mpofu’s greed and corruption. One day soon, we, the people of Zimbabwe will hold him accountable for his actions.

UK Zimbo banned from ‘pee and poo’ in public

‘Look across the world and very few national leaders stand out’ –…

Eddie Cross: There are solutions to the power crisis we face in Zimbabwe

After years of post-colonial failure, Africa is rapidly growing up – Cross

Eddie Cross: ‘We need to rebuild agriculture from the ground upwards’

‘We owe each Zimbo a corrupt-free policy and delivery culture’ –…