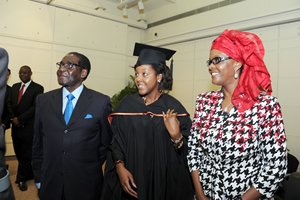 Zimbabwe’s budget presentation in parliament was moved from Thursday to next week Wednesday after President Robert Mugabe decided his daughter, Bona Mugabe’s graduation at the City University in Hong Kong was more important.

Mugabe and the First Lady Grace Mugabe were on hand to witness their daughter graduate alongside hundreds of other parents who came to celebrate their children’s achievements in the university’s Chan Tai Ho Hall. Bona graduated with a Bachelor of Business Administration (Honours) in Accountancy.

The Zimbabwean delegation accompanying the First Family erupted into a round of applause and ululation when Bona’s name was called out and she walked to the stage to be capped. There was more jubilation after the ceremony when Bona shook hands and hugged with her parents in a special room reserved for them.

Mugabe’s sister Dr Regina Gata led in singing the song “Makorokoto” to cap a joyous day for her niece. It was a moment to savour for Bona and her long time friend from primary school Nyaradzo Khimbini who also graduated with a Bachelor of Business Administration (Honours) in Human Resources Management. Khimbini’s parents attended the graduation as well.

“We are celebrating their determination to succeed. The two have been friends from long back, from primary to secondary school. We wish them well. The future is in their hands, they are well equipped to find their way into the world. To us these are Siamese twins, they are inseparable. That means the Khimbini family and our family are together,” Mugabe said.

Grace Mugabe said she was proud that her daughter had been obedient and succeeded in her studies. “Ndanzwa kufara zvakanyanyisa. Zvinhu zvinofadza kukudza mwanasikana zvakanaka. (I am very happy for our daughter. It is important that a girl child is groomed in an exemplary way and I am glad I played my role as a mother in that regard). I am happy girls ‘you did not disgrace us’.”

The irony of course is that ‘DisGrace’ is one of the many nicknames given to Grace Mugabe by frustrated Zimbabweans who have had to put up with her husband’s repressive political system. Another nickname reserved for her has been First Shopper, a pun on her many trips abroad to indulge in shopping.

President Mugabe meanwhile said in the formative days of their studies the two were haunted and harassed by British journalists but the university authorities acted to ensure the harassment was stopped to allow the two to pursue their studies in a conducive environment.

Mugabe suggested that since Bona and Nyaradzo were pioneer students from Zimbabwe and Africa at City University, the Zimbabwean Government and the institution should explore the possibility of a twining arrangement with one of the universities in Zimbabwe.

Following the graduation of the two, Mugabe said, City University should expect to receive applications from more Zimbabwean students wishing to study there. President Mugabe invited the university authorities to Zimbabwe and they accepted the invitation.

The President and his delegation were expected to leave for Beijing late yesterday.