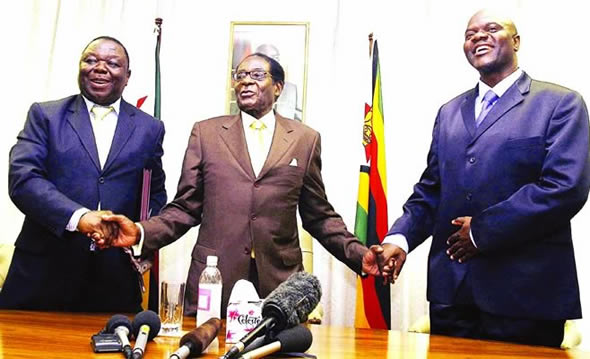 Prime Minister Morgan Tsvangirai’s MDC has dispatched an 11-page dossier to facilitator President Jacob Zuma warning him that the inclusive government in Zimbabwe is teetering on the verge of collapse. He urged SADC to urgently intervene to avert the situation from degenerating into anarchy.

The dossier, seen by the Daily News, lists seven key issues the party warns could be detrimental to the continuity of the inclusive government as well as political and economic stability in Zimbabwe. The dossier expresses the MDC’s frustration with unresolved disputes with Mugabe and urges the Sadc facilitator to urgently remove obstacles in the unity pact.

The damning report lists state-sponsored and sanctioned political violence, the breakdown in the rule of law, closure of democratic space, the partisan reporting in the public media, allegations that Zanu PF is running a parallel government, non-implementation of the agreed issues and security sector realignment.

“The political and security situation in Zimbabwe is deteriorating at an alarming and scaring pace and the MDC calls on Sadc to intervene to ensure the GPA does not collapse,” reads part of the dossier.

“It is now 32 months after the consummation of the inclusive government. Despite the economic gains made thus far, the political situation still remains precarious with the potential of degenerating into anarchy.”

Bitter rivals Tsvangirai and Mugabe formed a unity government in February 2009 to end a political and economic crisis, but have been feuding over implementing the Sadc brokered pact. The report says violence and intimidation are the biggest challenge to a free political environment in Zimbabwe.

Since the formation of the inclusive government, the cycle of political violence has not been broken and politically motivated, state sponsored and sanctioned violence has not abated contrary to the provisions of the GPA. The report says a self-styled Zanu PF militia group known as “Chipangano” is at the behest of many atrocities of violence against MDC supporters in Harare.

The report claims the police are at the centre of the breakdown of the rule of law in direct contravention of Article XI of the GPA, an assertion denied by police spokesman Oliver Mandipaka yesterday. The report says Zanu PF has disrupted the Parliamentary process of public hearings into the Electoral Amendment Bill and the Human Rights Commission Bill, the first body tasked with investigating rights abuses.

“The hearings have been marred with violence at the instigation of Zanu PF members,” the report says. Zanu PF supporters disrupted the Parliamentary hearings on the Electoral Bill on October 17 in Marondera, on October 18 in Mutasa, on October 19 in Masvingo, on October 20 in Gweru and on October 21 in Bulawayo. The report warns Zuma that the democratic space in Zimbabwe continues to shrink.

“In Marondera, Mudzi and Murehwa, the Prime Minister failed to tour clinics, market stalls and business projects in these areas amid threats of violence and physical harm targeting the Prime Minister and members of his delegation,” says the report.

Tsvangirai also says the veteran ruler is undermining the agreement through the arrest of several MDC lawmakers. The report says since January 2011, more than 600 MDC officials, members and activists have been arrested on clearly political cases. The dossier also points to looting of state resources.

“This is manifested in the generation and expenditure of state resources outside government treasury rules and regulations,” the report says. “Of note is the continued sale of State resources such as diamonds without the knowledge of the Treasury. There have over five diamond auctions to date and only two have been accounted for by the Treasury. The resources accrued are not known and have been used to facilitate the operations of this parallel government.

“Clearly, this remains why some elements in government have refused the call for transparency and nationalisation of diamonds in Chiadzwa. It is also possible that these diamond resources are now being used to perpetrate violence against civilians in Zimbabwe. This is also very plausible as security forces remain active in the extraction and selling of diamonds in Chiadzwa.”

The document also says the running of the parallel government has also been capitalised by the non-remittance of police spot fines, toll-gate fees, vendor fines and small-scale business fines.

“The intransigence of the police and other security agencies against the MDC shows that the parallel government is fully operational. Tsvangirai’s MDC accuses Mugabe’s Zanu PF of failing to honour an agreement to implement 24 issues agreed by the negotiators.”

The negotiators of the GPA presented their final report to the Zimbabwe GNU principals and to Zuma on April 6, 2010.The GPA principals then met on the 8th of June 2010 and agreed on 24 issues out of the 29 presented by the negotiators. “The sad reality is that of the 24 issues agreed, none has been implemented to date,” says the report. (see table).

Zanu PF has, in turn, charged that the MDC has not fulfilled its pledge to condemn sanctions imposed by Western governments on Mugabe and his inner circle. The report says state security agents were now at the epicentre of the perpetration of violence, intimidation and the selective application of the law. Daily News