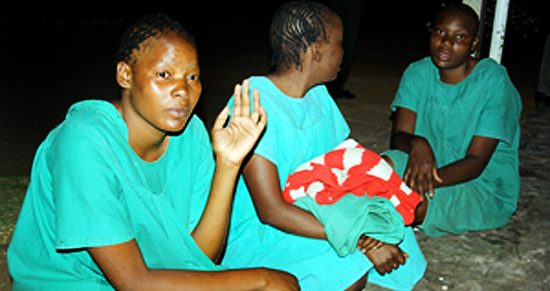 Gweru- Two of the three women accused of ritualistic sexual attacks on at least 17 male hitch-hikers were forced to seek refuge at a police station in Gweru last Friday after they were attacked at a busy bus terminus by irate residents in the city, it was reported yesterday.

Cousins Rosemary Chakwizira, 24, and Sophie Nhokwara, 26, out on $300 bail each, fled Kudzanai Bus Terminus in a taxi after being assaulted by a mob that recognised them. The taxi raced to Gweru Central Police Station, where the women spent four nights last month following their arrest.

Although Midlands provincial police spokesperson Inspector Patrick Chademana declined to comment on the matter, sources said police had already launched an investigation into the assault.

“I don’t speak to strangers over the phone,” Chademana told NewsDay before he hung up. The women now say they fear for their lives and are scared of walking the streets.

They are charged with 17 counts of indecent assault along with Netsai Nhokwara, 24, and an alleged male accomplice, Thulani Ngwenya, 24, who will answer charges of aiding and abetting the alleged sex attacks. Netsai is a resident of Riverside suburb where she lives with her boyfriend.

The women, who were allegedly found in possession of 33 used condoms at an accident scene – four of them half full of semen – insist they had nothing to do with reports of countrywide sex attacks on male hitch-hikers by women who went on to “harvest” their semen.

Some people in Zimbabwe believe sperms can make someone’s luck improve as it is associated with new life and regeneration.  Sophie said: “People started whistling and shouting, some saying they would deal with us just as we were passing the terminus.

“In no time they were on us, poking, pulling and roughing us up. We ran to a taxi waiting nearby and luckily the driver managed to get away from the scene as the mob banged on the doors and windscreen. Our lives are really in danger and we are scared. Are we not suspects until proven guilty? It’s as if people have already made their judgment and found us guilty.”

The two women — who live together in an unremarkable house in Mkoba suburb — told of how their lives had been “flipped upside down”. Sophie and Rosemary, who both admit they are prostitutes, insist the condoms were left by “clients” and they had packed them in a plastic bag with the intention of disposing of them.

The women deny media reports that they lead lavish lifestyles. They live in a three-bedroom unplastered house which Sophie says they were left by her grandmother. The four suspects will reappear in court on November 29 for trial – NewsDay

MDC-T should keep their eye on the ball