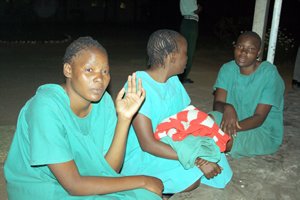 Three Gweru women were arrested recently and accused of raping several men. The women were paraded for all to jeer at. Their names were splashed all over the newspapers. To all intents and purposes they have been found guilty by the police, the public and the media – long before their case goes to court

All that is left is for the magistrate to send them to jail and throw away the key. Needless to say the women deny the charge of rape.

Elsewhere in this newspaper we carry the story of the demise of a male serial rapist who was jailed by the courts for 15 years and released early by Zanu (PF) politicians. His arrest was not made a public spectacle. His picture did not appear in the newspapers. And people did not flock to see him in custody.

Details of his abominable acts of violence against women were only made public in court. Since his death, Zanu (PF) ministers and officials have been queuing to pay tribute to the serial rapist. Information Minister Webster Shamu has even referred to him as “a God-fearing man”.

So why is the case of the three women different? Is it because as a society we don’t view the rape of a woman as a serious crime? Is it because in our patrilineal society we regard women as objects of sexual desire and when the tables are turned we act in a despicable manner?

These three women have not been convicted – but can they now expect a fair hearing given the publicity? Despite all the publicity, we have not been told what they are being charged with. If the women are eventually found not guilty of whatever it is, their reputations are now in tatters.

Meanwhile, four women who were raped during the 2008 elections have formed a support group for other women in a similar situation. The men who raped them are in most cases known. They have not been arrested because they committed the crimes in the name of Zanu (PF).

Out of desperation, these brave women have gone public – a very difficult thing for women anywhere in the world, but specially in Zimbabwe. Their attackers roam free, they have not been supported in any way, neither have they received counselling of any sort. One of them is now HIV-positive. In other words she has just been sentenced to a slow and horrible death.

Wilf Mbanga is the Editor of the Zimbabwean newspaper and this article was part of an editorial published 25 October 2011.

Mugabe could appoint Grace as President