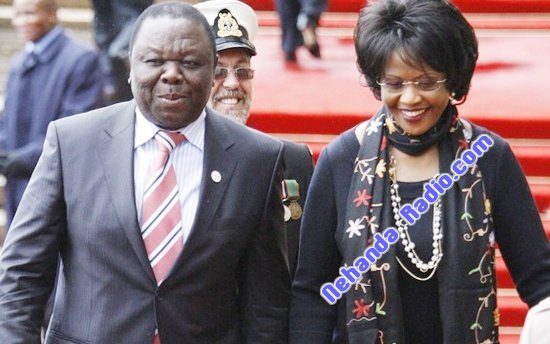 Nehanda Radio.com can exclusively reveal that Zimbabwean Prime Minister Morgan Tsvangirai is set to get married in December. The popular MDC leader’s wife, Susan, died in a highly suspicious car accident in March 2009 and since then speculation has centred on the woman who will fill that void.

Even his late wife’s sister Leah Mhundwa was at one time talked about as having been offered in marriage by her family in keeping with the widely accepted Shona custom of ‘chimutsa mapfihwa’ and ‘sara pavana’ (caretaker mother. Mhundwa, is said to be looking after his two youngest children, twins, in Johannesburg, South Africa where they are going to school.

In June last year Tsvangirai appeared in public for the first time with Locadia Karimatsenga Tembo. Tsvangirai, his two children Vimbai and Edwin along with is then adviser Ian Makone and Tembo all attended Joyce Meyer’s Festival of Life Conference in Harare.

Tembo, who constantly whispered with Vimbai during the proceedings, was seated just behind Tsvangirai at the high table. The two were spotted stealing glances at each other during the church proceedings.

Tembo is also believed to be close to the PM’s first daughter Vimbai and the two go to the same church Synagogue Church of all Nations, which is led by the famous Nigerian pastor TB Joshua. Last year, sources said, Tsvangirai and his children together with Tembo travelled together to Dubai for a holiday.

Tsvangirai first met Tembo in South Africa at the OR Tambo International Airport. She is said to be a wealthy woman who owns posh houses in Greendale and Greystone Park. She is also thought to be a mum-of-one from a previous marriage to one Ben Muchedzi.

Several MDC-T members were said to be unhappy with the relationship because Tembo is the blood sister to Beatrice Nyamupinga, the ZANU PF Member of Parliament for Goromonzi. Nyamupinga’s husband is current Deputy Ambassador to Jacqueline Zwambila of the MDC-T in Australia.

Highly placed sources have confirmed to Nehanda Radio.com that wedding plans are at an advanced stage and that Tsvangirai has since found new love. The identity of the woman is being kept a closely guarded secret.

This year in June Tsvangirai confirmed he was dating a lady whom he had fallen head over heels for.

“I don’t want to go into those personal things like this but let me assure you that people make the mistake to think that the Prime Minister has no right to date someone. I have a right to date and there is a difference between dating and marrying.”

“To marry is a serious commitment.  You don’t marry somebody you have known for a day and say you are getting married,” said a smiling Tsvangirai with a glint in his eyes.

Tsvangirai, who was flanked by the chief secretary in his office Ian Makone and press officer Conrad Mwanawashe during an interview with a local paper, said although there were a lot of things happening politically and in his personal life, he would not want those things to influence his choice of a wife.

“There are so many complications in my life. I have grown up kids. I have this responsibility as prime minister and I have got my politics to pursue. I don’t want these things to interfere with my choices,” a relaxed Tsvangirai said, sipping a glass of white wine.

Political commentator Pedzisai Ruhanya, writing on the matter early this year, said it was time that the Prime Minister settled down.

“History has shown that the wives of political players are sources of stability or instability to their husbands. My argument is that if Tsvangirai fails to handle his romantic life properly as he seeks a new wife, he could be in the same situation Mugabe got into when the late Sally Mugabe passed away in 1992,” Ruhanya said.

“There is a general belief among Zimbabweans that Sally was a compassionate scandal-free lady, and she assisted Mugabe compared to his current wife, Grace,” he added.

Dynamos DeMbare want to do the double