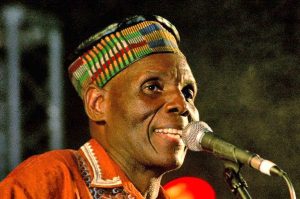 Superstar Oliver Mtukudzi has explained through his publicist Shephard Mutamba why he failed to attend Tongai Moyo’s funeral and burial amidst anger from fans who construed his no-show as unsympathetic and unloving to the deceased.

The fuming fans were aghast at Tuku’s absence considering Moyo was the first to arrive at the scene of the late Sam Mtukudzi and was heavily visible during the funeral of the music star’s son.

Dhewa also spoke glowingly about Mtukudzi who he credited with helping him find his feet in music during their time in Kwekwe when the lanky Tuku had relocated to that city.

Takura Nechipote, one of Moyo’s ardent followers lashed at Mtukudzi saying the veteran musician’s attitude smacked of arrogance and showed unloving tendencies to the departed.

“Tuku could have just attended the funeral even if he was not going to make it for the burial. He could have played in Mbizo Stadium in Kwekwe were people converged to give Moyo a send-off,” he said.

Mtukudzi was conspicuous by his absence at Moyo’s funeral on Tuesday that was attended by many musicians including Alick Macheso, Kapfupi, Pastor Charamba and Sulumani Chimbetu among others.

But his spokesman, Mutamba said Tuku had attended a hearing on the Broadcasting Authority of Zimbabwe on Tuesday the day that Moyo was buried.

“It is public knowledge that on the day of Tongai Moyo’s burial Tuku was attending pre-arranged public interviews conducted for new commercial radio licenses of which Tuku is an applicant.”

Mutamba said Tuku was represented at the burial by board chairperson Nick Manyame, manager Sam Mataure, operations director Watson Chidzomba and the publicist, himself.

Tuku then flew to South Africa on business the day Moyo was buried.

Meanwhile, Mtukudzi on Sunday goes back to his roots in Mashonaland Central where he stages a rare show in Bindura, the gold mining town where he last performed over a decade ago.

Mtukudzi’s rural home is in Madziwa after Bindura but before Mount Darwin. The show, where Mtukudzi plays with his trio, is set for Club CD in Chiwaridzo starting in the afternoon.

Munya Mataruse, a prodigy of Mtukudzi, was developed at Pakare Paye Arts Centre in Norton, an academy founded and funded by Mtukudzi, will curtain raise the show with his Kazevezeve Band. Munya has a new album Dengu reMhodzi. Daily News

Title race is between DeMbare and FC Platinum