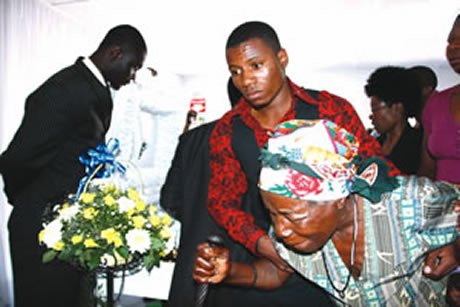 It was a funeral-cum-celebration of the life of one of Zimbabwe’s sungura icons as the who-is-who of the entertainment  industry converged at a Harare funeral parlour for a service for Utakataka Express frontman Tongai “Dhewa” Moyo.

It was bling all round as socialites took to the dance floor singing and extolling the brand Dhewa brought to the music industry that debunked the stereotype that musicians are a scruffy lot.

Heavily-built ladies performed the “sele” dance routine popularised by former Miss Biggy Matofotofo, Monica Chikasha, who was a regular at Dhewa’s shows. Fans danced wildly with some sitting precariously on the rooftop of the moving hearse. Business came to a standstill at Roadport where people jostled to catch a glimpse of the funeral cotege.

Alick Macheso’s wives Nyadzisai and Tafadzwa and daughter Sharon were among the mourners. It was heartbreaking seeing Tongai Moyo’s mother, Mbuya Chihera collapsing as she beheld her son’s body in the coffin while his wife Miniehle failed to see the body as she was continuously passing out.

Dhewa (43) died on Saturday evening from breathing complications and kidney failure. He will be buried at his rural home in Zhombe tomorrow, a family spokesperson said. The singer died at St Annes Hospital after a six-year battle with non-Hodgkins Lymphoma, a cancer of the white blood cells.

His cousin, Knowledge Chosa, said Moyo’s body would lie in state at his Msasa home in Kwekwe, before being taken to Mbizo Stadium for viewing in the afternoon.

“There is going to be a service tomorrow (today) in Kwekwe and body viewing preferably at Mbizo Stadium before the body leaves for Zhombe ahead of the burial on Tuesday,” he said.

The Utakataka Express frontman had been receiving treatment at St Anne’s Hospital for the past few weeks. Tumours had spread to his chest and stomach. His health deteriorated and he confided in his best friend and singer, Somandla Ndebele, that he wanted to rest for the whole of this year.

“I was going out of town on Wednesday when I heard that his health had deteriorated so quickly and I had to come back to see him,” said Ndebele. “He told me that he wanted to take a break at least up to next year when he fully recovers.”

Moyo, who was affectionately known as Dhewa by his adoring fans, honed his music career playing with numerous bands in his hometown of Kwekwe. The former hospital clerk joined Shirichena Jazz Band in the late 1980s, a period that saw him playing a pivotal role in releaseing the group’s album, “Ndoita Zvangu Ndega” in 1991.

It was not until he weaned himself from being a Leonard Dembo wanna-be to being his own man on the album “Samanyemba” that his career scaled dizzy heights. The album “Naye” saw Dhewa hogging the limelight with his chart topper “Nemumvura Mese” which earned him two Zimbabwe Music Awards. Tongai had a litany of stage names that included

“Muchina Muhombe”, “Samanyemba”, “Igwe”, and “Mopao Mokonzi”. At the peak of his career, Dhewa did not confine his gigs to Zimbabwe, but spread his tentacles across southern Africa and Europe. He toured the UK, USA, Botswana and South Africa at times in the company of Oliver Mtukudzi and Alick Macheso, while he also collaborated with a popular Batswana artiste.

Despite his flourishing career, Dhewa was never short of controversy. In 2003, he courted the public ire, when he proceeded with his maiden UK tour, after receiving news that his father had died. Probed on why he continued with the tour, the musician said he needed to work for the money that the UK promoter had given him which had all gone towards his father’s medication.

In 2008, Dhewa stirred the hornet’s nest when he reportedly said Macheso was no match for him because he was uneducated. This created rivalry that went on for years, despite efforts by several promoters to bring them together through joint shows.

At the height of his health problems a few years back, Moyo fired a salvo at promoters and musicians who were giving the impression that they were contributing towards his medical bills. He was footing his own bills. In a fit of pique at the time, the singer said he was not bankrupt, neither was he a charity case.